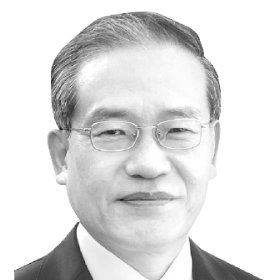 Cho Kyung-hwan
The author is a former visiting research fellow of the Sejong Institute.

Covid-19 is a nontraditional and atypical threat. What each country must protect has changed, and so has the threat they should defend against. Now, countries must protect their own people — known as “human security” — unlike the past when they were focused on protecting their state, or national security.

The new type of fear aroused by Covid-19 requires countermeasures through interdependence and interconnection among countries. Military power — such as nuclear weapons or cutting-edge stealth fighter jets — is of no use in battling the pandemic. The coronavirus is shaping a new national security paradigm.

The hallmarks of emerging security threats are connectivity, dormancy and transcendence of national borders. As a result, no one could predict the start of the fight against the coronavirus or can predict the end of it. A bigger problem is not knowing the size of the impact this virus will have on our lives.

A battle against infectious diseases can be compared to an intelligence battle. Empirical intuition, unreliable predictions and subjectivity must all be replaced with data and evidence backed by science and rationality. It is crucial to build a broad matrix system tailored for offering early warnings, taking preventative steps and devising follow-up measures. But contagions are not the only emerging security threat. From terrorism, cyber attacks, the refugee crisis to political turmoil in neighboring countries and the readjustment of the international order, there is a slew of intangible emerging security threats.

Then, who is best fitted to take on these new challenges? The answer lies in the characteristics of emerging security threats. A national intelligence agency — which has intelligence-based infrastructure within and outside the country — has strong networks within many fields, and constantly works by confidentiality and flexibility. The entity appears to have what it takes to stand against the emerging security threats. This is why our National Intelligence Service (NIS) is being urgently called upon.

On July 26, 2017, a reformation and development committee within the NIS announced that two NIS departments that had collected and analyzed domestic intelligence would be scrapped. With that decision, the NIS lost its idiosyncratic functions of security intelligence: protecting the nation and public; analyzing intelligence matters related to our national interest; reporting them to the president and Blue House; and managing intelligence from inside the NIS and other intelligence agencies.

The basis of existence for an intelligence agency is public trust. After being blamed for having been a part of deep-rooted evils, the NIS was punished for its transgressions. But if the NIS cannot do the dishes out of fear it may break a plate, it is a serious loss to the general public.

Bills to institutionally reform the NIS by separating its domestic and overseas spy activities and stripping the agency of its investigative authority have been stalled in the National Assembly for years. At a time when Korea is facing multiple crises, what to do about the NIS? The government must expand its responses for Coivd-19 by allowing the spy agency to play some roles.

If the government is afraid that the NIS may misuse or abuse its authority, it can strengthen internal and external control and surveillance and strictly set the limit to which the NIS can collect intelligence and make policy decisions.

During an emergency economic meeting on March 19, President Moon Jae-in said that the government must mobilize all resources and tools to overcome the crisis triggered by Covid-19. It is time to seek practical benefits. We urgently need Moon’s administrative order allowing the NIS to play its national security intelligence function at least within the realm of Covid-19.

It is about allowing the NIS to defend the nation against emerging security threats. The NIS can devote its passion for such missions — effectively and anonymously. If the government cannot rely on the NIS to do the job, it can place it under the Ministry of Interior and Safety or the Ministry of Justice. An intelligence war against the virus should not be delayed.