Turnout exceeds 65% even during outbreak

Turnout exceeds 65% even during outbreak

Wearing plastic gloves as instructed by the National Election Commission to prevent the spread of disease, a voter casts his vote at a polling station in Gwangjin District, eastern Seoul, on Wednesday. [NEWS1]

Wearing face masks and disposable plastic gloves, Korean voters elected 300 new National Assembly members on Wednesday in one of the world’s first national elections since the start of the coronavirus outbreak.

According to the National Election Commission (NEC), voter turnout was 65.8 percent as of 7:30 p.m., the highest since 1992. Voters cast ballots from 6 a.m. till 6 p.m. at 14,330 voting stations nationwide to elect 253 district lawmakers and 47 proportional representatives. Nearly 44 million people were eligible to vote in the elections.

A landslide victory for the ruling Democratic Party (DP), in cooperation with its satellite Citizen Party (CP), was forecast in the evening, according to major broadcasters’ analyses.

Three broadcasters KBS, MBC and SBS conducted a joint exit poll and announced their independent analyses at 6:15 p.m. The Korea Election Poll, participated in by the Korean Broadcasters Association and the three broadcasters, conducted the exit poll on 510,000 voters at 2,300 polling stations nationwide from 6 a.m. till 6 p.m. on Wednesday. 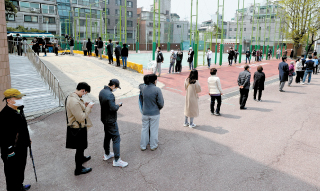 Voters queue up in a line to enter a polling station in Dongjak District, southern Seoul, on Wednesday while keeping a one-meter (3.3-foot) distance from each other. [YONHAP]

According to MBC, the DP and CP were expected to win 154 to 170 seats, and the main opposition United Future Party (UFP) and its satellite Future Korea Party (FKP) were forecast to win 116 to 133 seats.

No exit poll was conducted on early voters as the election law doesn’t allow it. This year, early voter turnout last Friday and Saturday was 26.7 percent, the highest ever, indicating that one out of four voters was excluded in Wednesday’s exit poll.

JTBC, an affiliate of the Korea JoongAng Daily, also announced its own forecast that the DP-CP alliance would win 143 to 175 seats while the UFP-FKP alliance would win 101 to 134 seats. It did not use an exit poll but created a new forecasting model with polling company Realmeter and the Institute for Convergence at Sungkyunkwan University, based on various opinion surveys and expert interviews. 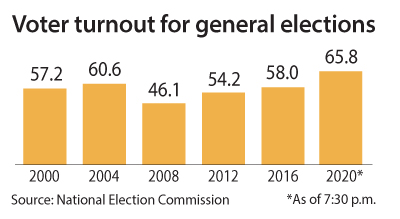 Wednesday’s elections, taking place in the middle of the coronavirus outbreak, were exceptional in several ways. The government made an unprecedented exception to allow self-quarantined voters to leave their homes and cast ballots after regular voting ended. They were allowed to leave their homes starting 5:20 p.m. and required to return home by 7 p.m. immediately after voting. The Ministry of the Interior and Safety said 13,642 out of 59,918 self-quarantined voters applied to vote.

It was also Korea’s first national elections since it lowered the voting age to 18. Including 125,000 high school seniors, about 540,000 18-year-old voters were eligible to cast their first-ever general election ballots on Wednesday.

Total results will be finalized this morning, as it will take time to count proportional lawmaker ballots. In 2016, ballot counting took seven hours and 50 minutes, and the NEC believes that it will take longer this time.

According to the NEC, ballot counting for 253 district lawmakers is scheduled to be completed around 4 a.m. today.

Counting for 47 proportional representation seats is expected to be completed about four hours later. The NEC will award the proportional seats to political parties immediately after the ballots are counted, based on a new system introduced last year.

The NEC said it scheduled a meeting to formalize the proportional representation winners at 5 p.m. today, about three hours later than after the last general elections, taking into account the overall ballot-counting schedule.