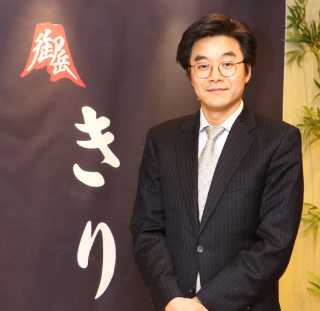 Shin Sang-mok, a former diplomat and the owner of Japanese restaurant Kiriyama, poses in the hall. [SHIN SANG-MOK]

Shin Sang-mok
The author, a former diplomat, is the owner of Japanese restaurant Kiriyama in Seoul.

Since I opened a restaurant in 2015, there have been a number of ups and downs. A shock that could be considered a crisis was the Middle East respiratory syndrome (MERS) outbreak in 2015. The epidemic forced people to avoid social contact, a direct blow to the restaurant business.

After the new coronavirus (Covid-19) started to quickly spread in China earlier this year, Wuhan, a megacity with a population of 11 million, was locked down on Jan. 23. But until mid-January, Korea watched the disaster unfolding in China as a spectator. My heart fell when the first patient tested positive in Korea on Jan. 20.

I went to pharmacies to buy hand sanitizer for the restaurant, but they were all sold out. I heard Chinese people were scooping up hygiene products. At a pharmacy, I ran into a Chinese person who was hoarding masks. If the situation in the neighboring country was so serious, I felt that Korean wouldn’t be unharmed.

As the rate of new infections stayed relatively low, the atmosphere was peaceful for a while. The government was confident in its disease control capability and reassured the people. Some officials even said that Korea would be saved from major damage this time. But I told my friend that once a death is confirmed in Korea, everything will change. It was a lesson from the MERS outbreak.

When that happened on Feb. 20, my restaurant’s sales suddenly halved. Employees agreed to work shorter hours under emergency management, and my landlord generously lowered the rent. But the unprecedented crisis is still in progress.

As our liquor purchases have fallen to 10 percent of the usual volume, I feel sorry for the liquor salesman.

After the WHO declared a pandemic in mid-March, multiuse facilities in Europe and the United States were shut down. Stories I heard from friends abroad reminded me of wartime. In Korea, businesses can still operate, and I’m thankful for that.

After a family member returned from abroad in March, I could attest to the merits of an active monitoring system. Thorough and systematic monitoring and support required advanced administrative capabilities probably only possible in Korea. The medical staff at the testing centers operated without taking days off, showing that their professionalism and devotion help bolster our social safety.

But the matter of making a living gets harder day by day. The Prime Minister said we should endure with savings, but I have no savings. I can hardly comprehend the effectiveness of the 100 trillion-won ($82.2 billion) government assistance. While the government emphasizes “unprecedented” assistance, it looks like a combination of old ones. The emergency funds could end up as a pie in the sky if you don’t have credit and collateral.

I want an exemption or delay on taxes and insurance premiums for instant relief, but I am frustrated that the focus is on the percentage of citizens getting the emergency relief. The April 15 parliamentary elections must have played a part in hurriedly packaging the relief program. While disease control seems to work in the field in an organized manner, the government’s economic policies appear to be uncoordinated.

The biggest reward from running a business is to create a place for someone to make a living. I make money running a restaurant and pay the tax equivalent of two or three public servants’ salaries. Building a sustainable business requires an effort on par with giving birth. When businesses like mine come together, that forms the very foundation of the society.

When businesses collapse one by one, the foundation of our society will fall. If businesses survive and jobs are maintained, we can make a comeback. I can pluck up the courage one more time if there is truly effective assistance.