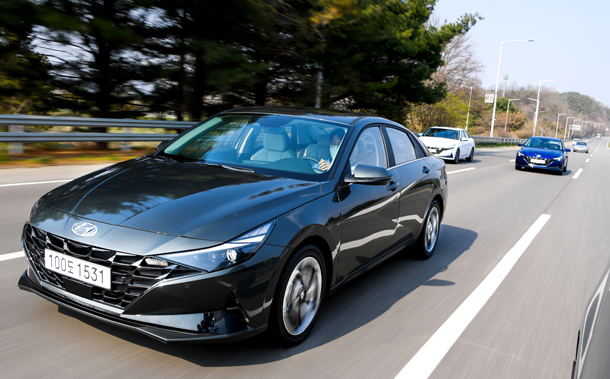 The seventh-generation Avante, also known as the Elantra, is driven down the road in Gyeonggi during a media test drive event held earlier this month. [HYUNDAI MOTOR]

PAJU, Gyeonggi - With larger dimensions, high-tech features and an unprecedented design overhaul, the new Elantra is a bold offering from Hyundai Motor as it looks to gain an edge in the global small sedan market dominated by Japanese automakers.

The automaker selected the right weapon in its fight against the neighboring ones.

The Elantra, also known as the Avante, is one of Hyundai Motor’s three main sedans, along with the Sonata and the Grandeur, and has proven its marketability on the home front as one of Korea’s most-purchased cars.

But that dominance isn’t so apparent in the U.S. market, where Hyundai Motor has struggled to increase its presence.

The Honda Civic and Toyota Corolla have traditionally been preferred over the Hyundai Motor Elantra for college kids on budget. The Japanese rides definitely looked better, drove better and, most importantly, got better gas mileage.

The Elantra’s seventh-generation model hit the market earlier this month, and it looks poised to change that trend.

Will it be enough to make foreigners think Hyundai before Toyota or Honda?

I don’t know, but it is evident the new Avante epitomizes what Hyundai Motor excels at and stays true to what made compact sedans popular in the first place.

The concept has been applied to the eighth-generation Sonata and the face-lifted sixth-generation Grandeur sedans that launched last year.

That vision was executed extremely poorly on the new Sonata, but Hyundai Motor seems to have ironed out the wrinkles for the new Grandeur and the new Elantra, both of which are wonderful in shape.

The sedan got longer and wider but stands shorter than its predecessor, offering a sportier profile. A parametric jewel pattern is printed across the front to replace the grille and headlamps, along with a sharp taillight design.

The overhaul was executed splendidly. The Elantra, which I’ve always remembered as the ugliest offering from Hyundai Motor and an embarrassment to the Korean automobile industry in terms of design, has came back to life with flashy looks.

But in that major plastic surgery, the surgeon appears to have opted for a Tokyo vibe instead of looking to Seoul.

The new Elantra now looks incredibly similar to the 2019 Honda Civic, and that might throw off some who were expecting more uniqueness. But minus the similarity to its rival, the new Elantra is probably the best you can expect from Hyundai Motor in terms of design for a while.

It was evident from the interior design that the new Elantra was specifically designed for singles in their 20s and 30s.

The car is driver-centric, meaning all features embedded throughout the insides were dedicated for the convenience and safety of the driver and the driver only.

The shotgun seat felt a little cramped compared to the driver’s side, and the infotainment system was slightly tilted toward the driver’s seat, rendering pointless the idea of playing a video for the passenger.

I didn’t feel the need to sit in the back. It already seemed cramped enough, and there was no point in testing the already-small seats.

The panorama-connected display facing the driver’s side, the 64-color palette of mood lights and the slim vents all work to emphasize spaciousness in a compact sedan.

The car didn’t feel so packed when I stepped in, and even with the low roofline, the headroom and the legroom were more than ample.

I couldn’t fully extend my arms, but I could still stretch, and that was enough for me.

But the best part of the new Elantra isn’t really the looks.

The car offers probably the best gas mileage on the market, and I was consistently impressed with how little fuel the 1.6-liter gasoline engine consumed over the course of two hours on the road in Gyeonggi.

The new Elantra could go the same distance as the Civic and the Corolla with the same amount of gas. It averaged 14.7 kilometers per liter (34.6 miles per gallon) in “Smart” driving mode during an hourlong drive to Paju, Gyeonggi.

On the way back to Goyang, the new Elantra averaged 21 kilometers per liter in its “Eco” driving mode.

Maybe that’s due to the car’s new architecture, which makes the Elantra about 45 kilograms (99 pounds) lighter than its predecessor.

The car felt a little unstable, and on rough terrain, it was spending more time in the air than I expected.

It was easy to keep myself driving under the speed limit, simply because I didn’t want to risk getting into an accident.

But it’s easy to stay safe inside the new Elantra. The car comes with a range of high-tech and convenience safety features that I’m about sick of talking about, and it’s good that they’re there.

For the young, inexperienced drivers, these alarms and sensor-based support systems mean a lot, and that could be a great selling point for the new Elantra before the Civic and the Corolla.

As I’ve said before, Hyundai Motor is probably the best automaker on the market when it comes to these high-tech features.

Hyundai Motor is better known for its SUV models in the United States, but this may be the car to show Americans that the Korean automaker can make good, price-efficient sedans as well.

The Elantra may look too similar to its competitors now, but so what?

If that’s the worst that can be said of a massive overhaul with plenty to offer younger drivers, then so be it.

According to Hyundai Motor, 44 percent of those who preordered the new Elantra were in their 20s and 30s.

While many are expecting Hyundai Motor to launch the new Elantra in the U.S. market later this year, we still can’t be sure. The coronavirus pandemic has immensely impacted all automakers’ car release and production schedules, and it’s pretty likely that will also be the case for Hyundai Motor and the new Elantra.

But whenever it does appear overseas, the Korean compact sedan is certain to create a quite storm.