‘High-intensity’ campaign is dialed down for 16 days

‘High-intensity’ campaign is dialed down for 16 days 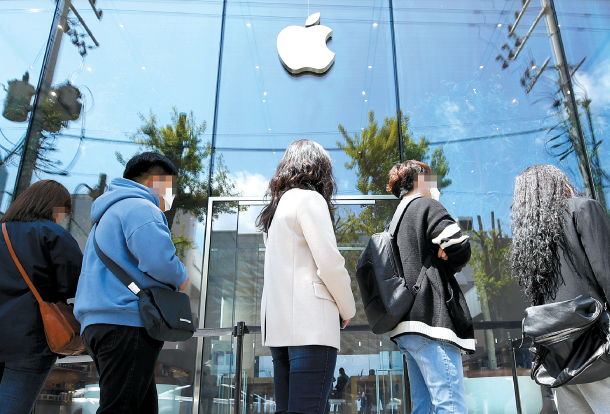 Customers queue up to enter Korea’s sole Apple retail store in Gangnam District, southern Seoul, on Saturday. It was the first Apple store outside of China to reopen during the Covid-19 pandemic. [YONHAP]

Korean health authorities Sunday outlined a new social distancing campaign that will last through May 5, easing several guidelines in the previous “high-intensity” campaign that ran for four weeks as new infections of the coronavirus sank to the single digits over the weekend.

Prime Minister Chung Sye-kyun said Sunday that the safest way for Korea to prevent another outbreak was to extend the two-week high-intensity social distancing campaign, but that “realistically doing so was not easy,” which is why the central government had to “search for a middle ground.”

The government basically said almost all hygiene rules in the high-intensity campaign will remain in place, but that many businesses that were previously strongly advised to shut down or halt mass congregations will be allowed to resume their activities as long as they abide by the hygiene rules.

Under the new campaign that will last for 16 days till Children’s Day on May 5, health officials said the central government will lift its “strong advisory” for nationwide religious facilities, private cram schools, fitness centers and clubs to shut down. The establishments will instead be advised to "restrain operations." Exams and recruitment procedures held at state-run organizations will also be “limitedly” held, under the proviso they follow hygiene guidelines.

Chung noted that authorities will review sending kids back to school while “monitoring the overall situation.”

A new social distancing campaign - dialed further down from the current version - will kick off right away on May 6 if Korea maintains the status quo, Chung added. Health officials later said that the government would assess Korea’s handling of the outbreak every two weeks to “adjust the level of social distancing.”

The government’s high-intensity social distancing campaign initially kicked off on March 22 and was supposed to end two weeks later before health officials announced a 14-day extension through yesterday, explaining at the time that it was too early for the campaign to stop. 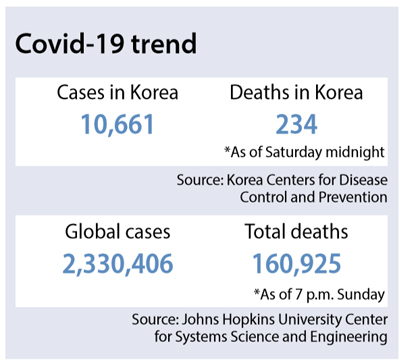 Under the high-intensity program, private cram schools, religious facilities, indoor gyms and clubs where people crowd together were strongly advised to temporarily shut down. In Seoul, all nightclubs, hostess and karaoke bars and other nighttime establishments that are called the “entertainment industry” in Korean were forced to shut down on April 8 after a hostess in Gangnam District, southern Seoul, tested positive for the coronavirus earlier this month.

A high-level official from the Seoul Metropolitan Government said Sunday that the ban on the capital’s entertainment industry will be lifted today.

For the first time in nearly two months since a huge cluster was traced to a church of the controversial Shincheonji sect in Daegu in mid-February, Korea’s number of new infections dipped to a single-digit figure Saturday.

The Korea Centers for Disease Control and Prevention (KCDC) said eight new infections were detected throughout the nation Saturday, down from 18 infections Friday and 22 infections Thursday. The total case load now stands at 10,661.

Of Saturday’s eight new infections, five were imported cases. Among Korea’s 10,661 total, 998 patients, or about 9.4 percent, contracted the disease overseas, mostly from Europe or the United States, KCDC data showed.

The Daegu hot spot in mid-February had led to triple-digit daily increases for several weeks, at one point peaking to 909 before dropping down to around 100 from mid-March as health authorities took drastic measures to test patients and quarantine them, while encouraging the public to practice social distancing.

New infections sank below 50 on April 5, and have largely kept falling ever since.

Yet health officials warned against premature complacency Sunday, saying Korea may face a second wave if people let their guards down.

“In the minds of health authorities,” said Kwon Jun-wook, director of the National Health Institute, who’s part of a government coronavirus task force, “we’re always concerned about another cluster in Shincheonji, a nursing hospital or a psychiatric hospital. We always think that [a new hot spot] may appear suddenly without any prior notice.”

Kwon warned the public to keep social distance from one another and remain vigilant.

Vice Health Minister Kim Gang-lip announced Saturday that the number of foreign passport holders arriving in Korea for short-term visits - less than 90 days - dropped by more than 70 percent last week since the country suspended visa waivers and visa-free entry for people from 90 countries and territories on April 13.

In Uijeongbu, Gyeonggi, a 26-year-old man was slapped with a pretrial detention warrant Saturday after he was caught disobeying the government’s two-week self-quarantine orders twice, the second time in Korea that a person has been detained prior to trial for wandering around during quarantine.

But the Army explained that all soldiers who were in close contact with them tested negative so far and that parents “don’t have to worry too much” about further infections because the three men had mostly been separated from other conscripts from the very beginning after informing the military they were Shincheonji adherents.

BY LEE SUNG-EUN, WE SUNG-WOOK [lee.sungeun@joongang.co.kr]