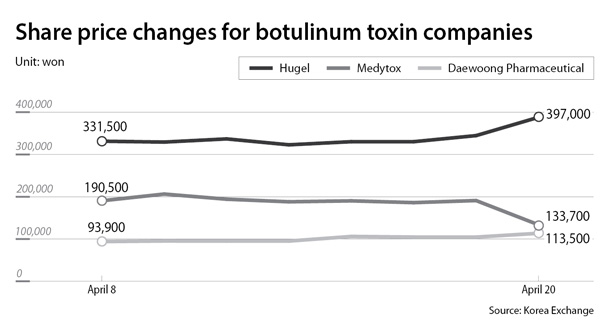 With the local drug authority moving to void Medytox’s license for its main botulinum toxin product, the news could spell a major shift in the domestic market as well as the future of a biopharmaceutical company that gets most of its revenue from the product.

The ongoing clinical trials for Meditoxin could take a hit, along with Medytox’s plans to expand overseas sales. Although the company will stay on the stock market for now, investors are rushing to dump their Medytox shares while others are banking on its competitors to gain.

As soon as trading opened Monday, Medytox‘s share price dipped to the index’s daily limit of 30 percent, falling to 133,700 won ($109). The Korea Exchange suspended trading of the company’s stocks for the first 30 minutes of the day on worries of panic selling, following the Ministry of Food and Drug Safety’s announcement Friday night that it was suspending all production of Meditoxin and pulling the three dosages off the shelves.

The ministry moved to revoke the license for Meditoxin while imposing a three-month manufacturing ban on the company, accusing it of using an unapproved ingredient in the manufacturing process.

Botulinum toxin, best known under Allergan’s brand name Botox, is a widely used toxic substance that paralyzes muscles to reduce wrinkles. Launched domestically in 2006, Meditoxin was the first approved botulinum toxin product in Korea and is reportedly sold in 60 countries at the moment.

All of Medytox’s production occurs domestically, meaning the loss of its license would also end its ability to sell the product abroad.

In a press release Monday, Medytox said it has filed an administrative suit at the Daejeon District Court against the Drug Safety Ministry to challenge the ministry’s Friday decision.

The company claims that Meditoxin has proved its efficacy and safety by passing the ministry’s evaluations for a number of years and argued that the ministry’s findings apply to time frame that ended nearly five years ago.

A former Medytox employee filed a report on the matter last year to the Anti-Corruption & Civil Rights Commission that Medytox used an unauthorized ingredient for months to manufacture Meditoxin.

Analysts believe that long-term losses are inevitable for Medytox, with the incident damaging consumers’ trust in the company. Any recovery for the company will take months.

“We forecast that an earnings slump is inevitable from Medytox’s main product Meditoxin losing approval,” said Hong Ka-hye, an analyst at Daishin Securities. “From this accident, Medytox is expected to lose its share in the domestic botulinum toxin market and will take a hit in trustworthiness of its products and corporate brand. If you consider the fact that competitors are increasing in the local market and the bundling effect of toxins and fillers, long-term business uncertainty is looming.”

The three companies’ products have accounted for most of the demand for the cosmetic toxin, aside from higher-cost foreign products that are usually in demand by wealthy consumers. Medytox’s botulinum toxin products have traditionally been most in demand, while those of Hugel and Daewoong remained in second and third, respectively.

Apart from the domestic competition, the loss of its license could hinder Medytox’s attempt to enter the Chinese market and disrupt the company’s ongoing dispute with Daewoong Pharmaceutical at the U.S. International Trade Commission (ITC).

Medytox filed a complaint with the ITC last year, accusing Daewoong Pharmaceutical of stealing its botulinum toxin strain as part of the process of manufacturing its own product, Nabota.

The matter has been the subject of domestic court proceedings for the past several years. Daewoong Pharmaceutical earned approval from the U.S. Food and Drug Administration to sell Nabota in the name of Jeuveau last year.

“There is a possibility that the potential cancellation could serve as a variable in the outcome of the ITC decision if the ministry doesn’t back out on its decision,” said Kim Seul, an analyst at Samsung Securities.

The ITC is expected to make a preliminary ruling on June 5. In a statement Monday, Medytox noted that the ministry’s decision is unrelated to the ongoing court proceedings against Daewoong Pharmaceutical.

The possibility remains that Medytox may overcome the latest scandal and keep its right to sell the company’s botulinum toxin products in Korea.

“Actions of [the ministry] are based on … concerns over current ‘public health’ based on sales and manufacturing. However, the period related to the ‘Meditoxin issues’ was from the manufacturing period of December 2012 to June 2015,” the statement said. “Meditoxin products manufactured during such period were all used a long time ago and no longer exist. Therefore, no harm to public health can currently exist.”

Medytox said vials of Meditoxin out on the market are those made since April 2017 and that those vials passed the ministry’s regular inspections in 2016 and 2018 on top of getting the green light on a number of surprise tests done by the ministry last year.

But the ministry ordered Medytox in October to discard three product lines of its botulinum toxins made at the company’s factory in Osong, North Chungcheong, after results from the ministry’s August inspection determined the toxins were not effective or safe enough.

In response, Medytox said it will increase manufacturing for its two other botulinum products, Innotox and Coretox, to pre-emptively make up for lost revenue.

The Korea Exchange said Monday that it is not considering suspending trading or delisting Medytox from the stock market at the moment, as the company still has other products to keep its business going.