Clubs, karaokes told to keep it clean or face closures

Clubs, karaokes told to keep it clean or face closures 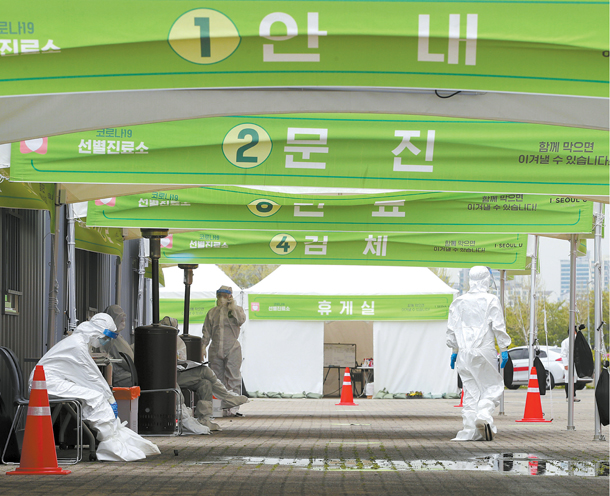 Medical workers wait idly for patients at a drive-through coronavirus infection testing center at the Jamsil Sports Complex in southern Seoul on Monday. No new infections were found in Seoul on Sunday. [YONHAP]

All nightclubs, hostess and karaoke bars and other nighttime establishments in Seoul, called the “entertainment industry” in Korean, were forced to close on April 8 after a hostess in Gangnam District, southern Seoul, tested positive for the coronavirus.

They were allowed to open on Monday, a day after the central government’s so-called high-intensity social distancing campaign wrapped up.

The high-intensity campaign did formally end on Sunday, but central government officials said that didn’t mean social distancing was entirely over. Authorities outlined a new campaign that will last 16 days from Monday through Children’s Day on May 5, easing several guidelines in the campaign that ran for four weeks but fundamentally leaving hygiene recommendations intact. 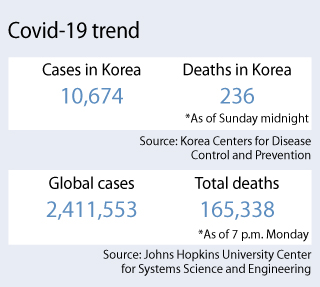 The central government said Sunday that all health guidelines will remain in place but that many businesses that were previously strongly advised to shut down or halt mass congregations - including clubs, religious facilities, private cram schools and fitness centers - will be advised to “restrain” their operations, which is considered a less restrictive warning.

Seoul health officials said Monday they would continue to randomly visit those establishments during the dialed-down social distancing campaign period to check whether people are wearing face masks and keeping a social distance from one another. Operators whose customers fail to behave can be told to shut down or face a fine of up to 3 million won ($2,460), which are the same level of penalties as in the high-intensity campaign, officials noted.

Korea added 13 new cases of the coronavirus Sunday, a bit higher than the eight cases tallied Saturday, according to the Korea Centers for Disease Control and Prevention (KCDC).

By Sunday midnight, a total of 236 people had died, up by two from the previous day, while 8,114 people had been declared fully recovered, up by 13 from the day before.

Of Sunday’s 13 new cases, seven were imported. Among Korea’s 10,674 total patients, 1,006, about 9.4 percent, contracted the disease overseas, mostly from Europe or the United States.

Seoul on Sunday had zero new patients, which was the first time in nearly a month and a half.

But the jubilation didn’t last long.

Seoul has counted at least 624 coronavirus patients so far, 304 of whom have been declared fully recovered. Two people died.

President Moon Jae-in thanked the public during a cabinet meeting Monday for their participation in the nation’s battle against the pandemic but said it was yet too early to feel relieved, given the worsening situation abroad.

On the new social distancing campaign, the president asked the nation to be a bit more patient with the inconveniences, saying the whole process is meant to declare “a complete end” to Korea’s coronavirus outbreak as soon as possible.

As for what kind of social distancing campaign may follow the current one, Vice Health Minister Kim Gang-lip said Monday during a press conference that government officials were putting their heads together to come up with a new set of guidelines to be implemented from May 6.

Kim said the new rules will be specific to industries. Draft versions will be announced to the public from Wednesday. Those new guidelines depend on how well Korea does in its fight against the virus until May 5, health authorities said.

If infections go back up, there’s a possibility the nation may stick to the current rules or return to the high-intensity campaign.

Almost all areas in Korea except one are seeing fewer infections lately. The exception is Yecheon County, North Gyeongsang, about 165 kilometers (103 miles) southeast of Seoul.

Over the past 11 days, at least 37 cases have been traced to a 48-year-old woman in the county who tested positive on April 9.

Since then, many of her relatives, colleagues and acquaintances have contracted the disease, and they went on to transmit the virus to other people.

In Daejeon, a military hospital that cared for coronavirus patients closed Monday after four medical workers showed symptoms of the virus.

All four workers tested negative, but the KCDC said the rest of the medical staff at the hospital would be tested.