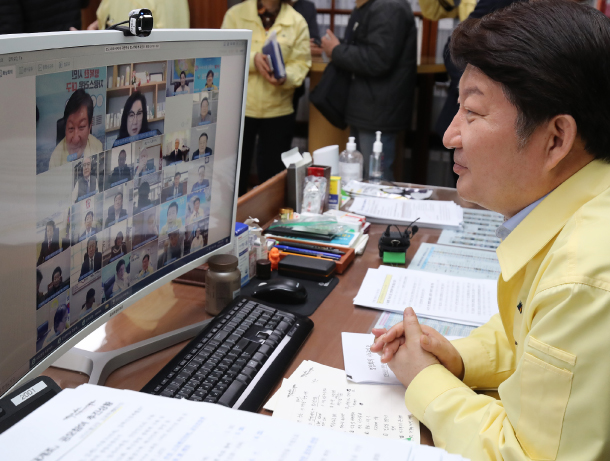 Daegu Mayor Kwon Young-jin attends from his office Tuesday a trial online meeting of a newly launched committee to discuss ways to overcome the city’s economy and coronavirus outbreak aftermath. The committee is comprised of nearly 200 members from all walks of life, including civic groups, religious organizations and academia. [NEWS1]

A number of state-managed forests and arboretums will reopen today across the nation as Korea slowly prepares to get life back on track now that the coronavirus epidemic appears to be under control. Campsites and zoos may gradually reopen to the public from May 6.

Korean health authorities Tuesday outlined a few details of the new 16-day social distancing campaign that launched Monday and runs through Children’s Day on May 5, saying the central government is planning to reopen many outdoor public facilities that had been closed due to the outbreak.

The new social distancing campaign kicked off immediately after the central government’s so-called high-intensity social distancing campaign wrapped up Sunday after a four-week run, in which numerous public facilities were closed and churches, private cram schools, clubs and indoor fitness centers were strongly recommended to close. Particularly in Seoul, all nightclubs, hostess and karaoke bars were forcibly closed from April 8 to Sunday after a hostess in Gangnam District, southern Seoul, was diagnosed with Covid-19.

Central government officials said the new campaign would be a dialed-down version of the high-intensity campaign, though hygiene recommendations would fundamentally remain intact. 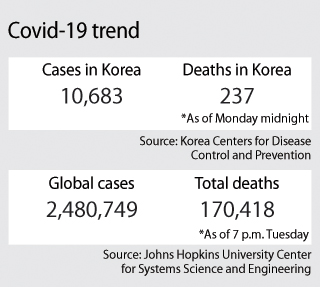 Korea had nine new infections tallied across the nation Monday, down from 13 the day before.

Yoon Tae-ho, a senior official in the central government’s coronavirus task force who’s in charge of devising measures to prevent the spread of the disease, said Tuesday in a press briefing that some 56 state-managed outdoor facilities, including 43 natural recreation forests and two arboretums will reopen to the public today, though any lodging facilities in those places will remain closed.

In the following days, Yoon said outdoor facilities managed by local government offices will also reopen, including football and baseball fields, though visitors still have to wear face masks and have their temperatures checked before entering.

Campgrounds and zoos will likely reopen from May 6 after the current social distancing campaign ends and the central government introduces a new campaign, which will be an even more dialed-down version than the current one if the country manages to maintain the status quo.

Twenty zoos across the nation have been closed since the fourth week of February when daily infections peaked to the three digits.

A draft version of health guidelines for people to follow individually and when they’re in groups will be revealed today, Yoon said Tuesday, while separate guidelines for each industry will be introduced from Friday.

Yoon noted that the central government is also planning to revise the law in order to fine any violators of such heath guidelines, whereas possible incentives for groups who faithfully stick to the rules are being discussed as well.

Including the nine new cases Monday, Korea has so far tallied 10,683 infections, according to data from the Korea Centers for Disease Control and Prevention. As of Monday midnight, 237 people had died, up by one from the previous day, while 8,213 people had been declared fully recovered, up by 99 from the day before.

Of Monday’s nine new cases, five were imported. Among Korea’s 10,683 total patients, 1,011, or about 9.5 percent, contracted the disease while overseas, mostly in Europe or the United States.

The latest hot spot in Yecheon County, North Gyeongsang, grew bigger Tuesday after a 19-year-old young man tested positive for the coronavirus. Thirty-eight people including the 19-year-old have been traced to a 48-year-old woman in the county who tested positive on April 9. Many of the woman’s relatives, colleagues and acquaintances have contracted the disease, and they went on to transmit the virus to other people.