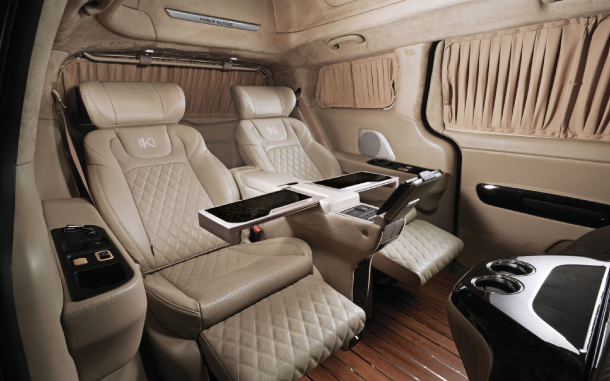 The interior design of the Carnival van modified to a four-seater version. Kia Motors is adding a four-seater option for the new Carnival slated to launch in the second half this year. [KC MOTORS]

Kia Motors is planning to add a four-seater option to its trademark Carnival van product line later this year to target executives.

The product has been nicknamed the CEO van by the company.

According to a spokesperson from the second-largest automaker by sales in Korea on Tuesday, Kia Motors is preparing to add the four-seater vehicle option when the fourth-generation Carnival is introduced in the second half of the year.

By adding that option, customers will no longer need to remove the seats themselves from the Carnival, originally offered with seven, nine or 11 seats, to make the interior more appropriate for C-suite executives. The Carnival has been a popular vehicle option for celebrities and CEOs in Korea as it has enough room inside for passengers to utilize the car as a workspace.

“We are not technically launching the four-seater option, as we are not setting up a separate line to create that option,” said Kia Motors spokesperson Kim Tae-sik over the phone.

“The four-seater option will be made from the Carnival being sent to our contractor to have extra seats removed and the body restructured.”

For now, customers who want a four-seater option have to get the vehicle customized after buying the vehicle themselves. The modified versions have to be approved by authorities as road-worthy.

With the launch of the fourth-generation model, Kia Motors will work with KC Motors to fulfill customer requests for four-seater units. KC Motors has been the preferred partner for Kia Motors when modifying Carnival vans.

The company is also contracted to modify Mercedes-Benz’s Sprinter van in Korea.

The process eliminates the need for customers to get approvals themselves.

But Kia Motors said that even with fewer seats, the van won’t be qualified for bus lane use. The current statute only allows cars that have more than nine seats and more than six passengers to use the lane.