Buddhist followers line up while maintaining distance from each other, to participate in a ritual in which fragrant water is poured on Buddha’s statue on the anniversary of Buddha’s birth at Jogye Temple in central Seoul on Thursday. [YONHAP]

Korea reported another single-digit number of new coronavirus cases Thursday, as the country’s strict social distancing campaign and enhanced quarantine measures have helped contain the spread of the virus.

The country added eight new virus cases, bringing the nation’s total infections to 10,702, according to the Korea Centers for Disease Control and Prevention (KCDC).

The figure marks a drastic drop from the Feb. 29 peak of 909 new cases. The country confirmed its first Covid-19 infection on Jan. 20.

Of the eight cases detected Wednesday, four were imported. 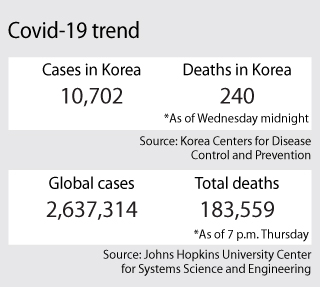 The nation’s death toll from the coronavirus rose by two to 240, the authorities said.

The overall fatality rate reached 2.24 percent. The figure, however, reached 23.5 percent for patients in their 80s and above.

In total, 8,411 virus patients in Korea have been discharged from hospitals, up 134 from a day earlier. The country has carried out tests on 583,971 people since Jan. 3.

The number of new infections continued to slow in Daegu, the nation’s worst virus-hit region that accounts for around 64 percent of the total cases, with just four additional cases.

No new cases were reported from the capital city of Seoul as well.

Despite the looming signs of a slowdown locally, health authorities remain wary of the rising number of imported cases.

The total number of cases coming in from abroad reached 1,021, with Korean nationals taking up around 92 percent of such cases.

The figure accounts for nearly 10 percent of the total confirmed cases.

With its monthlong social distancing drive, Korea avoided the worst scenario despite being one of the first countries hit hard by the virus that originated from China.

While health authorities remain wary of another wave of Covid-19 infections, the country is slowly moving to lift some of its social distancing regulations this week, giving the go-ahead for some facilities, including gyms.

The country, however, said overall social distancing is still in force until May 5, and it is considering moving toward “everyday life quarantine” after the date if the number of cases continues to plateau.