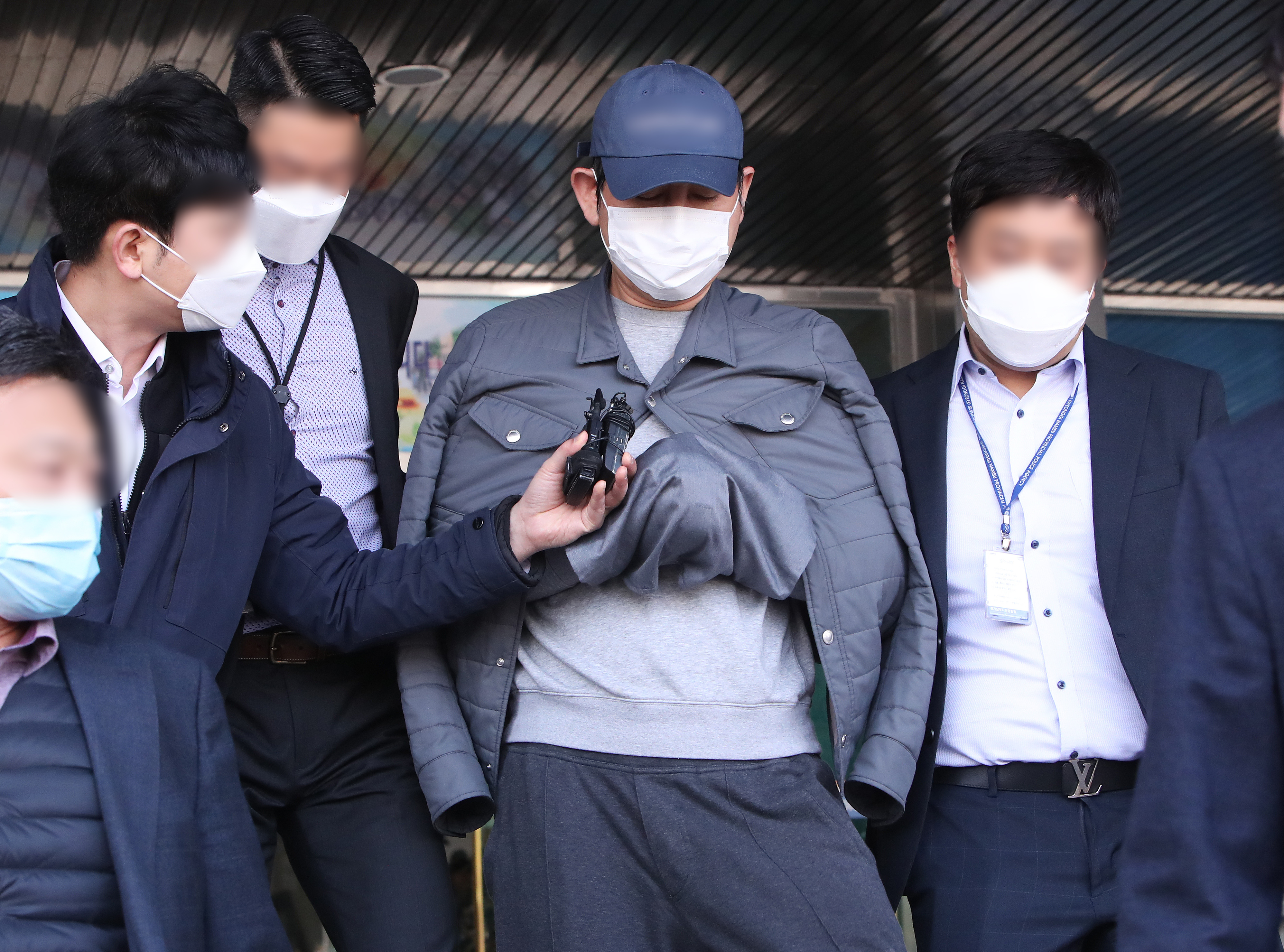 Kim Bong-hyeon, a detained suspect implicated in a scandal surrounding the hedge fund Lime Asset Management, is led out of the Suwon Nambu Police Precinct for questioning on Friday. [YONHAP]

The alleged masterminds behind a scheme that has effectively broke Korea’s largest hedge fund were nabbed Thursday by police after months on the lam.

The two are being held under pretrial detention on accusations of misappropriation, embezzlement and other misdeeds related to the freezing of Lime Asset Management funds and massive losses for investors in those funds.

The Gyeonggi Nambu Provincial Police Agency said Lee Jong-pil, former chief investment officer at Lime, was with hiding out with Kim Bong-hyeon, former CEO of Star Mobility, when they were arrested at a residence in northern Seoul. The two suspects had been on the run for five months since November, and their whereabouts were the stuff of constant speculation.

Lee is the primary suspect and allegedly responsible for inflating asset prices, fraud and other malpractices at Lime, which earlier this year suspended withdrawals totalling almost 1.6 trillion won ($1.3 billion) from its troubled sub-funds.

Lime’s total assets were valued at around 5 trillion won.

Last July, Lime suspended four of its sub-funds — Pluto TF-1, Tethys 2, Pluto FI D-1 and Credit Insured 1 — due to liquidity issues. The funds invested in private securities, mezzanine instruments and other assets. In October, withdrawals were frozen at three of Lime’s main funds and at 149 of its sub-funds.

Prosecutors summoned Lee for questioning in November, but he disappeared a day before he was due to appear in court.

The Financial Supervisory Service (FSS), a financial regulator, estimated in February Lime’s asset value had dropped by about half, while some of its sub-funds had gone to zero and were effectively worthless.

Prosecutors and the FSS have said that Lime continued to push investments in order to bring in new funds to prop up the enterprise, effectively engaging in Ponzi-style practices.

The company said in a press release that it is currently trying to recover as much value as possible and once again apologized to investors and the local investment industry.

One of the most questionable of Lee’s investments was in Star Mobility, which may have been effectively run by Kim. The company received around 59.5 billion won from Lime.

According to prosecutors, Kim embezzled around 51.7 billion won from Star Mobility. Some of this was withdrawn in January, a day before Kim himself went into hiding from authorities.

Prosecutors believe the two suspects colluded to siphon money out of Lime. Through Kim’s connections, Lee invested Lime’s funds into a variety of companies that have since gone effectively bankrupt.

Aside from the possibly criminal practices by Lee and Kim, analysts are highlighting the use of total return swaps (TRS) as a factor in losses suffered by individual investors in Lime funds.

Lime’s various sub-funds received investment from three institutional brokerages — Shinhan Investment, KB Securities and Korea Investment & Securities. The TRS agreements signed with these institutions obligated Lime to return their investments ahead of others.

Lime invested a large bulk of its assets into convertible bonds of small- and medium-sized firms with no ratings, which was made possible due to the fact that private funds, unlike their public counterparts, are free to invest in unlisted companies or mezzanine investments.

But a drop in Kosdaq stocks late last year led to big paper loss and a run by investors, leading to Lime’s decision to freeze withdrawals.

Prosecutors are also probing the possibility that Lime may have received political protection for its operations.

On April 16, they arrested an official who worked for the Blue House’s chief economic aid on suspicions that he was bribed by Kim in exchange for information on the FSS’s investigation into Lime.

Prosecutors have noted that they are focused primarily on uncovering fraudulent financial practices rather than investigating whether there may have been a systematic political dimension behind Lime’s activities.