A bull market in used products attracts the big kids

A bull market in used products attracts the big kids 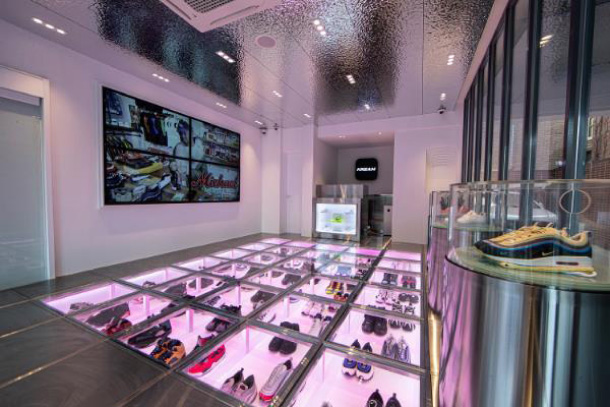 Limited-edition sneakers are displayed in a showroom of Kream, a mobile market for exclusive sneakers operated by Snow, an affiliated company of Naver. [KREAM]

Forget about oil, gold or shares. How about Air Jordans and Gucci handbags?

If younger Koreans have it their way, designer items and high-end sportswear will be where the money is.

Millennials and those defined as Generation Z are willing to stay up late and bring their friends and even family members to wait in front of designer brand stores to get their hands on exclusive items so they can sell them at a higher price later.

So far, what they do seems to make sense.

Online platforms, such as Naver, StyleShare and Ticketbay, are trying to get a piece of the action by guaranteeing the security and the transparency of these transactions.

In Korea, selling new or like-new exclusive secondhand items for a higher price is known as “resale.” While most secondhand goods lose value over time, resalable items can appreciate over time. 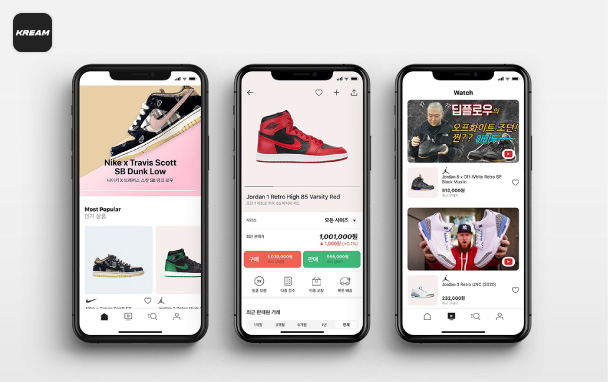 The mobile page of Kream, a sneaker reselling platform launched in March. [SNOW]

The best resale items are those with a big fan base, including sneakers, luxury goods and tickets to performances or sports events.

And the prices of these items can grow beyond imagination.

A pair of Nike Air Force 1 Para Noise sneakers, worn by the K-pop star and fashion icon G-Dragon, was once sold for 13 million won ($10,600) online, 60 times its original price. The sneakers were originally priced at 219,000 won.

“Limited fashion items from popular brands like Nike and Off-White have become a means of investment for many people. On the launch date for an exclusive design, we have teens, parents and even grandparents lined up early in the morning, outside the store,” said an official from Bungaejangter, an online thrift store.

Most of the transactions in the resale market are done behind closed doors, between individuals who meet through online communities. This has made it easy for sellers to trick buyers with counterfeit goods. Resale platforms are trying to change that by providing strict and clear verification of luxury items.

Naver subsidiary Snow introduced Kream, an online platform to trade exclusive designer sneakers. The platform will get a part of the 70 billion won invested by Naver into Snow.

Sneakers are one of the most popular items in the resale market, and competition has already heated up in countries like the United States and China. According to New York’s Cowen & Company, the global resale market for sneakers is likely to grow up to $6 billion by 2025.

“Millennials and Generation Z now have the financial capacity to spend a lot in the market. They like exclusivity and are unapologetic about spending lots for items they care about. That’s maybe why they are so crazy about exclusive sneakers,” said Kim Mi-jin of Kream.

Kream is known for providing the market value of each item in real time. It also has a professional team of appraisers who verify if the products are authentic or not.

StyleShare, a local clothes-sharing platform, started its own online resale platform, Ours, to sell and buy luxury fashion items.

Ours uses the consignment model. It takes care of the marketing, delivery and customer service on behalf of the item’s owner. Chanel bags, Gucci watches and Tiffany necklaces are traded through the platform.

Those from their teens to their 30s tend to have a higher desire for luxury goods, according to Boston Consulting Group.

In a survey conducted of 12,000 consumers aged 18 to 35, the consumption for high-end fashion goods was 10 percent higher than in other age groups.

Buying secondhand also fits their lifestyles, as consumers who fall in that age group consider sustainability an important factor in making a purchase.

“Trade for secondhand luxury items used to center around middle-aged consumers. Our website provides luxury items that are more in line with younger tastes,” said Sung Si-ho, the CEO of Ours.

Ours is expected to launch a mobile app in July and plans to become a corporation of its own later.

Ticketbay is one of the popular platforms. Launched in 2015, it was recognized by customers for its “Purchase Safety Program,” which guarantees the safety and security when buying tickets. More than 1.3 million people use this platform.

Last year, Ticketbay mediated around 4 billion won worth of transactions on its website. It launched a global web page in February for international K-pop fans.

“There were concerns among consumers when purchasing secondary market tickets, since most are traded through platforms like social media or thrift stores that have little to no measures to guarantee safety,” said Han Hye-jin, CEO of Timplus, the operator of Ticketbay.

“We never send money to the seller, until we verify that the tickets were handed over to the buyer. We have not had a single case of fraud since June 2015.”

Critics point out that the secondary purchase of tickets can allow for illegal ticket brokers to operate online.

Ticketbay has emphasized the legality of its offering, claiming that there are no legal implications for using its service.

“To make a sound marketplace for secondary tickets, since last April, we made it a rule not to take fees for tickets traded lower than the original price,” said an official from the company.