Above, Koo Seo-ryeong is described as an ambitious and competent politician who became Korea’s youngest and first female prime minister in the “The King: Eternal Monarch.” However, her wardrobe and controversial lines left some viewers feeling disappointed with the first two episodes. [SBS]

Unlike the slow-moving film industry, where productions take well over a year to film, edit and prepare for distribution, television has the advantage of being flexible and quick to adapt to trends and social change. But, the responsive nature of small screen productions means that they are more sensitive to public demands and often take heed of what viewers like and what they don’t.

Three of the most buzzed-about drama series of the season have faced controversies in recent weeks due to their anachronistic dialogues and story lines that raised eyebrows and caused viewers to voice their discomfort online.

The websites of television shows have long had comments sections to provide viewers space to freely express their opinions and engage in lively discussions about what’s happening on the show. But after Naver and Daum, Korea’s largest portal sites, closed down the comments sections for articles related to entertainment last month, more than ever, viewers are flooding the official websites of television series to share their thoughts and opinions on what they’re watching.

A violent scene from the eighth episode of JTBC’s “The World of the Married,” top, was heavily criticized by viewers who took to the show’s website to express their anger. At right, a scene from the KBS show “Once Again” featured women wearing revealing clothing to attract male customers to a gimbap store. [JTBC, KBS]

Due to the change, writers and producers may start seeing a need to respond to audiences even more quickly than before to correct their mistakes.

A recent example is from the hit drama series “The World of the Married,” which is currently airing on JTBC. The show was showered with praise for being a well-made affair story over the course of its first six episodes. But, the drama’s site was bombarded with criticism after the eighth episode aired on April 18.

At the end of the episode, an intruder attempts to hurt the show’s main character Sun-woo (played by Kim Hee-ae), but the violence was depicted from the perspective of the attacker, giving viewers the impression that they were in the middle of a violent video game. Many viewers pointed out that the extreme violence shown during the episode was not appropriate for minors. The episode was rated 15 and over (indicating that the content of the show is deemed inappropriate for those under the age of 15) despite the fact that all of the episodes that had previously aired were rated 19 and over.

The scene was said to be unnecessarily vivid, and the way the producers depicted it as if it was part of a game raised objections.

Moreover, the show’s depiction of female characters also contributed to a rise in criticism. The eighth episode also showed a female waiter in her 20s approaching Je-hyuk (played by Kim Young-min) as a gold digger. She makes a proposition that she’ll become his lover if he buys her a designer bag. 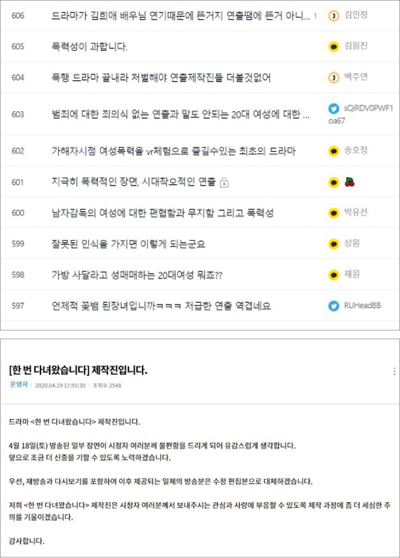 Viewers complain, top, about scenes from the JTBC series “The World of the Married” on the show’s website. Above, producers from KBS’s “Once Again” publish an apology after receiving backlash regarding a specific scene. [SCREEN CAPTURE]

“Isn’t it outdated thinking to match a young woman with a designer bag?” one person wrote on the show’s comments section. “Once again, I realize how the mass media is treating women like products.”

In response to the objections, the show’s producers announced on April 23 that they would rate the rest of the show’s episodes 19 and over “to display the escalating conflicts between characters as vividly and realistically as possible.”

Despite their efforts, the ninth and 10th episodes, which aired over the weekend, failed to subdue criticism from viewers.

“I don’t understand why the protagonist’s lack of physical strength due to her gender keeps being emphasized as she continues to be hit by male perpetrators,” read a comment posted after the 10th episode aired. “I hope that for the future, the producers will refrain from inflicting violence - both physical and verbal - upon helpless women. Even though it’s only a story, when people repetitively see and hear negative actions it’s bound to influence them.”

The popular KBS weekend series “Once Again” has also received backlash for its accused objectification of women. A recent episode of the show told a story of a gimbap (dried seaweed roll) shop that lacked customers. In order to attract more people to their store, the women working there wore revealing clothes to “lure” male customers, including high school students. Enraged viewers rushed to the show’s site to leave complaints, with many saying that they “could not believe” that a public broadcaster would air such a scene on weekend evenings, when families tend to gather together to watch the show.

The complaints led the producers of “Once Again” to post an official apology the following afternoon.

“We are sorry to have created discomfort among viewers due to a specific scene in the episode that aired on April 18,” the statement read. “We will be more cautious from now on and will replace the problematic scene with a revised one in our re-runs.”

In “The King: Eternal Monarch,” currently airing on SBS, the first line uttered by the country’s youngest and first female prime minister Koo Seo-ryeong (played by Jung Eun-chae) was, “Wireless bras don’t support my breasts properly.” Although she was described as an ambitious and power-hungry character, she gets jealous after hearing rumors that the king (played by Lee Min-ho) might have a girlfriend.

“Is she young? Pretty?” Koo asks her secretary.

“Are those really the words uttered by Korea’s youngest and first female prime minister?” one viewer wrote after watching the episode. “What century is [the drama] living in? I’m so tired of hearing these randomly written, outmoded lines [uttered by female characters].”

“It’s different now - viewers are now a part of the story,” culture critic Jeong Deok-hyun commented. “Unlike in the past, people aren’t afraid to voice how they feel. But that doesn’t mean that cases like this didn’t exist in the past. People have become more gender-sensitive.”