Decision on school reopenings on the way

Decision on school reopenings on the way 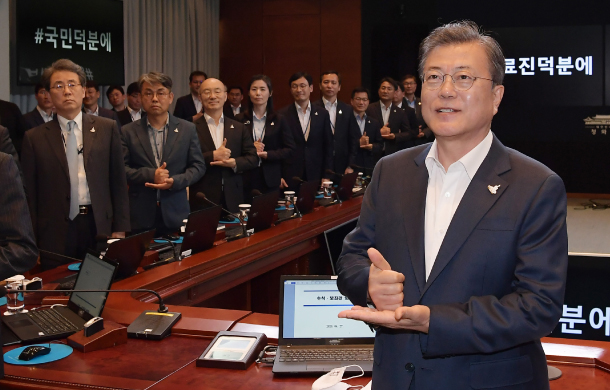 President Moon Jae-in, right, and his aides use sign language to express their gratitude to medical workers who have been fighting Covid-19 as part of the national “thank-you challenge” movement before they begin a weekly meeting in the Blue House on Monday. The photos were posted on social networking services. [YONHAP]

Korea will decide in the coming days whether to begin normal school classes as new infections of the coronavirus remain low.

Prime Minister Chung Sye-kyun ordered education authorities, during a meeting of the country’s Covid-19 command center Monday, to field opinions from teachers and parents about holding face-to-face classes at schools starting with the ninth and 12th grades, with other grades gradually following.

In Korea, the ninth and 12th grades are the highest grades among the three-year systems of both middle and high school. When the nation began online classes last month due to the coronavirus pandemic, ninth and 12th graders were the first to begin remote learning given their busy schedules with high school and college admissions.

Chung urged the Education Ministry to reach a conclusion by early May at the latest and disclose specific plans to the public, saying it’s impossible to infinitely keep children away from school. 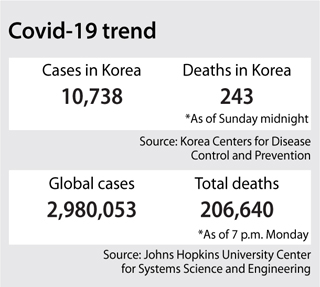 “Children’s safety cannot be comprised,” said Chung, “but even so, we can’t keep them cooped up in their homes forever.”

If Korea maintains its low number of new infections of the coronavirus and other industries slowly start to return to their pre-Covid-19 normal lives, Chung said schools can “cautiously” begin to allow their students to return to the classrooms as well “though it really won’t be an easy issue.”

“If children really do start going to school again, there will be so many things schools will have to prepare for beforehand,” he said, “like deciding whether to make it a requirement for teachers to wear face masks during class, how to keep physical distance [between students] and what to do about school meal hygiene.”

An Education Ministry official later explained to reporters that the ministry plans to finish fielding opinions from teachers and parents within this week, and hopefully make a final announcement on whether to open schools sometime between this Saturday and next Tuesday.

The ministry said schools are already preparing to resume normal classes by stocking face masks to distribute to students when they come back and devising contingency plans for if a student or teacher gets infected. Korea had 10 new infections tallied across the nation Sunday, bringing the total caseload to 10,738, according to the Korea Centers for Disease Control and Prevention (KCDC).

As of Sunday midnight, 243 people had died, up by one from the previous day, while 8,764 people have been declared fully recovered, up by 47 from the day before.

Of Sunday’s 10 new infections, seven were imported. Among Korea’s 10,738 total patients, 1,044, or about 9.7 percent, contracted the disease while overseas, mostly in Europe or the United States.

As Korean health officials try to prevent a second wave of infections, the central government announced Monday that an electronic wristband tracking violators of the government’s self-quarantine order has officially been launched.

The wristband is connected to a GPS-equipped “self-quarantine app” that all people under isolation have to download on their smart phones, and if anyone tries to take off the wristband or move far away from their phones, their local government office receives a notification and can call the police to track them down. Government officials had complained about some people under quarantine wandering around their neighborhoods while leaving their phones at home. The app comes with a GPS function, so if someone leaves their permitted boundary with their phone, the app informs the person’s local government office about the breach.