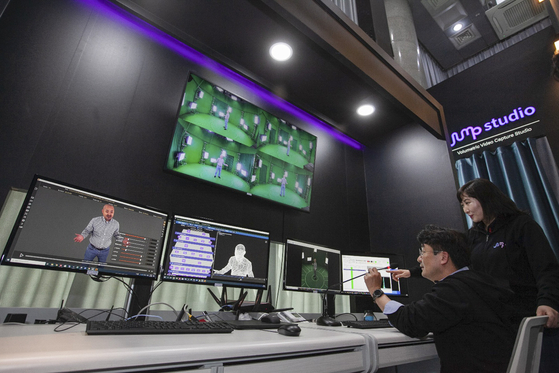 The term refers to a graphic technology that isn’t quite virtual reality (VR) and isn’t exactly augmented reality (AR).

The concept features virtual elements in a real-world setting, like AR, but allows a person to interact with that digital element, as in VR. The technology is similar to 3-D holograms that can interact with the user.

Mixed reality content can be presented via smartphone apps and devices like Microsoft’s Hololens. Microsoft is the more experienced partner in this field, having participated in the making of the VR movie “Awake,” in which it created the hologram character visuals. It also worked with pop stars like Billy Corgan on hologram music videos.

SK Telecom’s Jump Studio is the first mixed reality studio in Asia, the company said. It’s a collaboration with Microsoft. The U.S. company offered the “Volumentric Video Capture” technology which can scan an object for 3-D visuals. SK pitched in with rendering technology, used to accurately present the scanned image, and space recognition, which is necessary to locate virtual figures on a real-life background.

The Jump Studio will have 20-or-so experts involved in production, filming and computer graphics. A total of 106 cameras are present.

Apart from the infrastructure, the studio also has technology to automate a lot of the 3-D modeling procedures, which in the past had to be done with human hands and therefore consumed more time and cost more. Creating a three-minute mixed reality video would have taken three to four months in the past and cost several millions of won. At Jump Studio, the same outcome can be made in one to two weeks’ time with less than half that budget.

SK plans to use the studio to produce more virtual content for its users. This includes partnering with corporate clients in fields like entertainment, games or advertising.

The Korea of Institute of Science and Technology Information and the Korea Creative Content Agency forecast in a joint report that the mixed reality market will be worth 2.1 trillion won ($1.7 billion) by 2022.

Apart from entertainment or movies, where adoption of mixed reality is already active, SK said the technology can be used for many fields, including medicine or lectures.