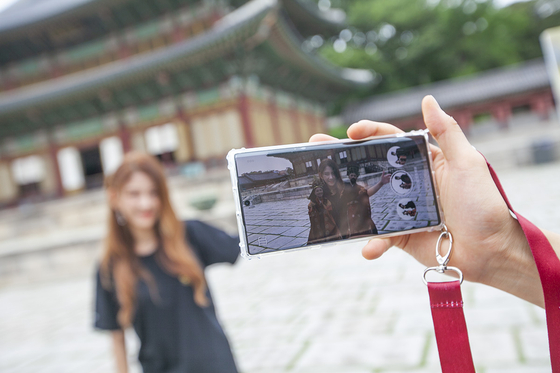 
SK Telecom has introduced an augmented reality (AR) tour guide app that allows visitors to explore all the hidden nooks and crannies of the six century-old Changdeok Palace in central Seoul.

Exclusively offered on 5G, the Changdeok ARirang app guides users through 12 locations inside the Unesco heritage site built in 1405. The main protagonist of the mobile app is the fictional animal Haechi, which is projected on a real-life background. Inside the screen, this virtual tour guide walks ahead of the users from one place to another and shares stories about the old palace. 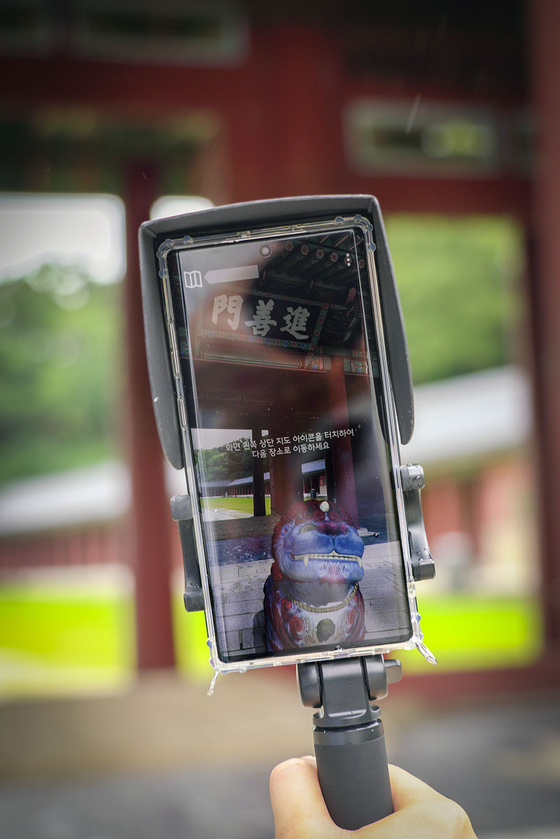 Small details were added to offer moments of engagement: The user can vote in a debate taking place between the king and a subject inside the throne hall, practice archery in the back yard and watch a traditional dance that was only performed inside the palace.

The biggest perk of using the virtual tour guide app is the accessibility to take a closer look at spots inaccessible to tourists for preservation reasons. Once used as the king’s bedroom, Heejungdang for example can only be seen from the outside. But with the Changdeok ARirang app, visitors can virtually walk inside its walls and see the interior of what the room looked like 600 years ago.

It took a full three months for experts of the palace and traditional culture to complete the scenario and verify the content. The Changdeok ARirang app is a collaboration between SK Telecom, the Cultural Heritage Administration and Google Korea, which contributed the technology for creating 3-D AR content.

The launch of the AR tour guide app seems to fall at a timely moment as people look to minimize contact after the Covid-19 outbreak. But according to SK, the service started out to increase accessibility of tour sites for visitors in wheelchairs.

“We were looking for ways to use 5G for social good when we encountered the issue. Among 1.78 million visitors to Changdeok Palace a year, 110,000 have physical disabilities. They said obstacles like high stairs and thresholds were creating barriers to enjoying the site,” said Yea Hui-kang, SK Telecom’s vice president and head of brand marketing, in a Monday press conference held inside the palace.

The app also offers a tour route optimized for visitors with wheelchairs or strollers.

From August, SK Telecom plans to launch an “at-home” version of the Changdeok ARirang app which will take Haechi indoors to introduce the Unesco heritage site.

The AR tour guide app will be available to possessors of 5G smartphones only, regardless of the telecommunications service provider. SK will operate a booth at the palace’s entrance to lend 5G handsets for visitors until the year’s end.

According to the company, a 5G connection was a must to ensure the low latency and wide bandwidth necessary to run the app. The content uses up 5 gigabytes of data, not to mention the app constantly has to interact with the device to read the user’s location. Haechi, for example, turns back and waits for the user if they can't keep up.

In terms of infrastructure, the reason this AR app can work at such speeds is because of SK’s 5G edge cloud, which installs 5G equipment in multiple spots closer to user devices, hence boosting low latency. The main cloud on which the app operates is inside SK Telecom’s headquarters in central Seoul.

There are 12 5G base stations inside Changdeok Palace constantly transmitting data to and from the handset. According to SK, this technology enables visitors to experience 60-percent faster speeds than downloading content in the app.

“The spread of non-face-to-face interaction due to the Covid-19 outbreak is transforming how we experience arts and culture,” said Chung Jae-suk, the administrator of Cultural Heritage Administration. “I hope that Changdeok ARirang will serve as a valuable opportunity for people around the world to enjoy Korea’s beautiful cultural heritage.”

The Changdeok ARirang app can be downloaded from Google Play and One Store. It currently has Korean and English language options.