‘Extracurricular’ explores a dark side of youth

‘Extracurricular’ explores a dark side of youth 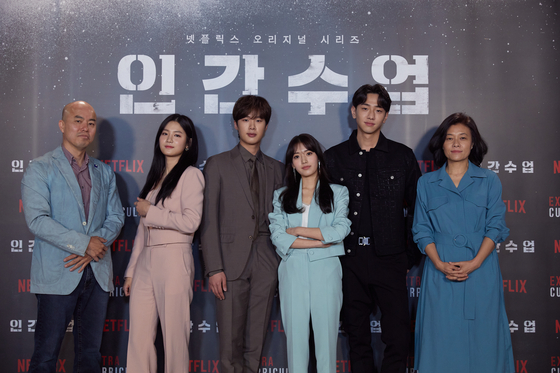 At what age do people start to take responsibility for their choices in life? According to the Netflix original series “Extracurricular,” responsibility starts in high school.

That idea is timely in Korea, where the “Nth room” scandal triggered public wonderment at the involvement of teenagers, both as perpetrators and victims. The Netflix series, which is available starting today, centers on four high school students leading very different lives who get entangled in a massive crime.

“’Extracurricular’ might be probing the uncomfortable reality that we’re living today,” said Yoon Shin-ae, CEO of the series’ production company, Studio 329, in an online press conference on Tuesday. “As a creator, I wanted to approach societal issues [of juvenile crime] through the series but with responsibility.”

“But the story also reflects the raw truth,” Park added. “I spent my teens in Korea, and the story is about their confusion - their conflicts, formation of their own perspectives, resistance, struggle - and it was portrayed realistically.”

“After reading the script, I was flabbergasted,” director Kim said. “At first I had no idea how to approach the story at all. I thought, ‘If I ruin this, then this could be it for me.’ That’s how risky the story was. But I thought I would regret it more if I turned this down.”

For Kim Dong-hee, sympathizing with the complexity of emotions that his character, Ji-soo, feels was more difficult that he expected.

“Ji-soo is caught up in a whirlwind of emotions - he’s guilty, tense and frightened - as he’s driven into a corner,” Kim said. “He’s under so much pressure he can’t even sleep at night. At this point in the story, I felt like there was this big wall between me and him that I wouldn’t be able to break through. To tap into his feelings when he couldn’t sleep, I didn’t sleep either. Whenever I was stuck, I talked a lot with director Kim.”

“The main message of the story is that we accept the fact that anyone can make a mistake - it’s what follows next that defines what kind of person we are,” director Kim said. “From high school on, you can’t avoid that kind of responsibility anymore.”

“Anyone can make mistakes and bad decisions,” Yoon added. “But when you choose to commit a crime, you will receive your deserved punishment, and the story shows how painstaking and horrible the consequences are.”

The 10 episodes of the series are to start streaming on Netflix worldwide at 4 p.m. today.