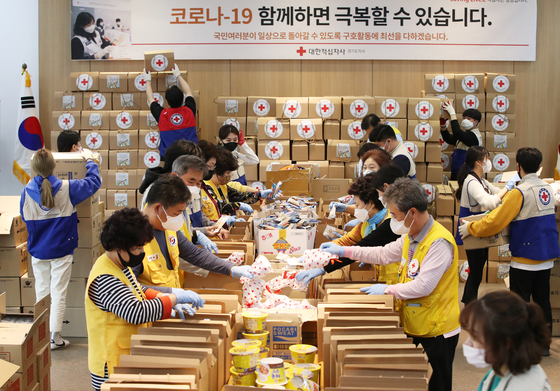 Local health authorities Tuesday stressed that the upcoming holidays will be “a crucial moment” for the central government to determine whether to further dial down its social distancing campaign, warning the public to remain on guard against the coronavirus.


The stern warning came as many people in Korea have begun to leave their homes after weeks of self-quarantine and as new infections of Covid-19 remain low.

With three holidays coming up in Korea, health officials fear people may use the occasion to travel around the country and overlook the possibilities of mass infections. Buddha’s Birthday is Thursday, May Day on Friday and Children’s Day next Tuesday.

Plane tickets to Jeju Island, a popular getaway on the southern tip of the nation, have already mostly sold out for the weekend.

I want the public “to remember that the closer you get to another person, the higher the chance of Covid-19 transmission will be,” Vice Health Minister Kim Gang-lip cautioned Tuesday.

Tuesday was the 100th day since Korea reported its first coronavirus patient, a 35-year-old Chinese woman who traveled from her home in Wuhan, China, the epicenter of the Covid-19 pandemic, to Incheon International Airport on Jan. 18 to spend the Chinese Spring Festival holidays with her friends in Korea.

“We’ve had big and small crises over the past 100 days,” said Kim. “Thanks to the public’s active participation in social distancing, devotion from health care workers and efforts from local government officials, we were able to come this far.”

Yoon Tae-ho, a member of the central government’s Covid-19 command center, echoed Kim’s concerns Tuesday, saying the public mustn’t let their guards down till the world develops a vaccine and treatment for the virus, which he said will take about one or two years.

Yoon highlighted that the most crucial element for preventing a possible second wave of infections is to block any chance of another hot spot appearing, continuing that the central government has recently examined ways to control infections among the socially vulnerable, including homeless people and undocumented foreigners. Specific details of the plan will be announced later this week, Yoon said.

Korea added 14 new infections throughout the country Monday, slightly higher than the 10 people counted Saturday and Sunday, according to data from the Korea Centers for Disease Control and Prevention (KCDC). The total case load now stands at 10,752.

As of Monday midnight, 244 people had died, up by one from the previous day, while 8,854 people have been declared fully recovered, up by 90 from the day before.

Of Monday’s 14 new infections, 12 were imported cases. Among Korea’s 10,752 total patients, 1,056, or about 9.8 percent, contracted the disease while overseas, mostly in Europe or the United States, KCDC data showed.