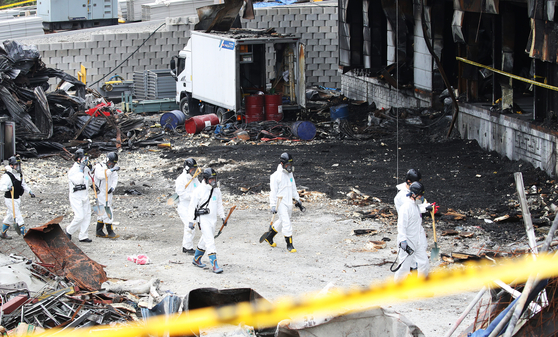 
Prime Minister Chung Sye-kyun on Sunday visited a public mourning altar set up for the victims of a massive fire that killed 38 workers at a warehouse in Icheon, Gyeonggi, last Wednesday.

Along with several government representatives, including Minister of Land, Infrastructure and Transport Kim Hyun-mee and Minister of Employment and Labor Lee Jae-gap, Chung assured the victims’ families that the government would thoroughly investigate the accident and ensure any person responsible is appropriately punished.

The accident was the disaster to take place in Korea this year in terms of the number of casualties. All of the victims were construction workers, including two Kazakhs and one Chinese national. The remaining victims were all Korean.

According to police and fire authorities, the fire broke out around 1:32 p.m. on the second floor of the warehouse, where welding work was being done on a freight elevator simultaneously with work involving the use of urethane, a combustible chemical used to insulate building interiors.

The sparks caused by the welding work may have ignited the nearby urethane, causing a large explosion and massive flames, police said.

Dozens of workers at the site rushed to escape the building in droves, but the absence of sprinklers or any fire suppression systems may have worsened the casualties.

Toxic gases emitted from burning building material may have also poisoned some of the victims, many of whom were day laborers.

According to witnesses, at least 10 explosions were heard throughout the building, while strong winds that day trapped black smoke within the building.

A total of 151 firefighters were deployed to the scene, and it took fire authorities hours to finally extinguish the flames by that evening. 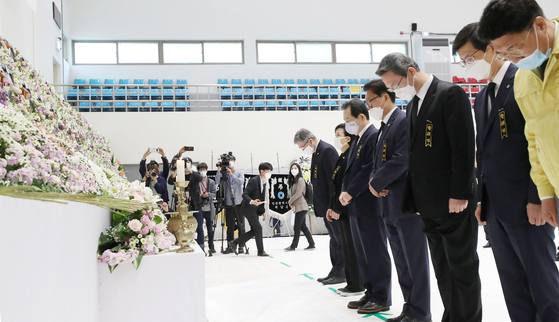 Government officials including Prime Minister Chung Sye-kyun, fifth from right, on Sunday pay their respects at a mourning altar for victims of a massive warehouse fire that killed 38 workers in Icheon, Gyeonggi. [YONHAP]


Many of the victims’ bodies were heavily damaged by the fire, which led to difficulties in identifying them. All 38 victims were eventually identified through DNA evidence by Sunday.

Suspicions have been raised that the accident was exacerbated because the construction company responsible for work on the warehouse did not abide by safety guidelines.

The company, Kunwoo, is suspected to have ignored repeated warnings by the Korea Occupational Safety and Health Agency, a government watchdog that reviews safety regulation worksites, on fire hazards at the warehouse construction site.

Police launched an investigation on Thursday into Kunwoo and four other construction agencies that worked at the site to verify whether the firms had employed a safety inspector to monitor potential hazards, as per regulation. A total of 17 people in association with these firms have been banned from leaving the country as part of the investigation.

A representative of the victims' families called on the prime minister to thoroughly investigate the accident while protesting the government’s decision to conduct autopsies on some of the victims without their families’ consent.

Chung answered that insufficient punishment for violators of industrial safety laws may have motivated managers to ignore their responsibilities to ensure worker safety.

“This accident was the result of [people] being slaves to money and sacrificing safety due to cost concerns,” Chung said. “Going forward, we will fix the law so that safety is never abandoned for the sake of cost.”