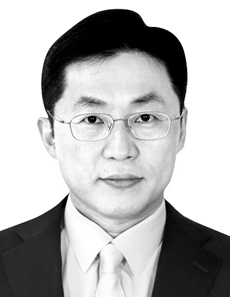 Jung Hyo-sik
The author is Washington correspondent of the JoongAng Ilbo.

U.S. President Trump has finally ventured out of the White House after 33 days of confinement to command control over the coronavirus outbreak for a “working weekend” at Camp David, the presidential retreat in Maryland. He is presumed to have spent most of his two-day escape to redesign campaign strategy with his closest aides and advisors, like daughter Ivanka Trump, son-in-law Jared Kushner, and National Economic Council Director Larry Kudlow. The gathering at Camp David came at a pivotal moment when Trump’s approval rating took a hit from the virus pandemic. The latest poll with the November election coming just six months away showed the biggest drop in Trump’s rating and placed him behind his Democratic Party rival in key battleground states.

Polls from FiveThirtyEight and RealClearPolitics put former Vice President Joe Biden beating Trump in the general election by a small margin. In the polls taken during April when the epidemic peaked in the United States, Trump was behind Biden by 6.5 percentage points in Pennsylvania and 6.1 percentage points in Michigan. He is losing in two states responsible for 20 and 16 respective votes in the electoral college votes of 538 beyond the margin of error.

Pennsylvania and Michigan are crucial for Trump’s reelection. Because he had beaten Hillary Clinton in the 2016 election by winning 306 electoral votes over Clinton’s 232, if he loses the two swing states, he may not muster 270 votes — the minimum electoral count to secure his reelection.

He also has been behind Arizona (with 11 electoral vote counts), Florida (29), Wisconsin (10), and North Carolina (15) where he had led by 1 to 3 percentage points within the margin of error range of 2.0 percent to 4.4 percent. If he loses any one of them, Trump would have to leave the White House in January. He trails behind Biden by 0.7 percentage point in Ohio (18) where he had won by 8.1 percentage point in last election.
Even internal polls, including one from Republican National Committee, showed dismal results in key battlegrounds. He reportedly lashed out at his campaign manager Brad Parscale and threatened to sue him by reminding him that “I’m not losing to Joe Biden.” He tweeted that the fake news spread has become worse than in 2016.

In the worst-case scenario, Trump could be defeated by Biden in all seven swing states and lose by a 352 to 186 ratio in the Nov. 3 vote. Experts do not think Trump will lose all the swing states, as loyalty among Trump’s supporters is stronger than for those supporting Biden. The results had been the opposite in 2016 when Clinton had kept a comfortable lead over Trump in polls six months before the election.

Karl Rove, former deputy chief of staff for President George W. Bush and credited for his win in second term, in his column in the Wall Street Journal advised the Democratic Party against letting down their guard as American voters are currently too preoccupied with the coronavirus outbreak to mind the election. Clinton was ahead 7.3 points in national polls, 10.7 points in Wisconsin, 10.5 points in Michigan, 7.4 points in Pennsylvania, and 6.7 points in Florida in the polls in late April 2016.

But in the actual election, Clinton managed to beat Trump only in the national polls.

Thomas Schwartz, professor at Vanderbilt University, noted Biden’s surge is natural given the damage to Trump from the economic troubles and the disinfectant comment. But he warned many things could change over the next six months, pointing to Biden’s lack in energy, decisiveness and support loyalty versus Trump. He will also have to come up with a strong running mate to win the election. Steffen Schmidt, political science professor of Iowa State University, noted that aides have cut briefings by Trump after the disinfectant flop to revise campaign strategy, and Biden is still dogged by the sexual harassment allegation of 27 years ago.

The biggest test for Trump is to restore the economy that has crumbled from the virus attack. If unemployment and the gross domestic growth slumps continue into the third quarter, his chance of staying in office for another four years  would become slim. David Lublin, professor of American University, pointed out that Trump ruined his political chance with poor handling of the virus-battered economy. While the ruling party triumphed in Korea and Larry Hogan, Maryland’s Republican Governor, or Democratic Governor Andrew Cuomo managed to benefit from the virus outbreak, Trump has been losing votes due to his lacking empathy and leadership.

Robert Schmuhl, professor of the University of Notre Dame, predicted the November election would be a judgment on Trump’s handling of the outbreak and economy and raised alert about the virus damage in Michigan, Pennsylvania and Florida, where he won in small margin in the 2016 election. Online journal Politco projected Trump would unveil tax and regulatory proposals to highlight his strength over economic management in the televised coronavirus town hall meeting at the Lincoln Memorial on Sunday.