The number of regular workers fell for the first time ever last month, though the statistic has only been compiled since 2009.


In March, 18.27 million people were employed as regular workers at companies with more than one employee, down 1.2 percent, or 225,000 people from the same period a year earlier. 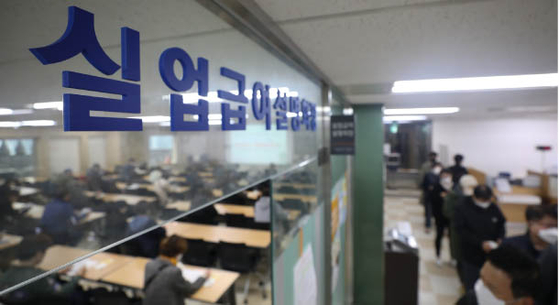 People sit in a room listening to a lecture on how to apply for government unemployment benefits on April 21, in the Work Plus Center located in Jung District central Seoul. [NEWS1]

The hardest hit was services. In the food and accommodations category, 153,000 jobs were lost, which is a 12 percent drop compared to March last year. The arts, sports and leisure and education categories lost 11.9 percent and 6.7 percent of their workers, respectively.

In manufacturing ? which employs a fifth of Korea’s regular workers ? the number of employed fell 0.3 percent, or 11,000, to 3,718,000.
The impact was particularly dramatic for small businesses.

The number of regular workers increased by 1 percent, or 29,000 people, at businesses with more than 300 people, however the total fell by 1.6 percent at companies with fewer than 300 employees.

A total of 93,000 workers on special employment contracts, such as actors and performers, lost their jobs compared to a year earlier, a drop of 7.9 percent.

“The overall worker’s monthly wages for February decreased due to a drop of bonuses and performance-based incentives in the semiconductor and automobile industry,” explained Kwon Ki-sub, a manager at the Ministry of Employment and Labor.

“However, these statistics were compiled before the coronavirus outbreak, so it is hard to determine the exact economic impact of the virus outbreak.”

The government is coming up with policies to cushion the impact of the unemployment crisis. Experts emphasize that aggressive policies that push the private sector to increase new hires would be necessary along with expanding social security, such as unemployment benefits and subsidies sent to companies to maintain the workforce.

The government has proclaimed a “Korean New Deal” to create 550,000 jobs in the public sector, which critics say is a Band-Aid solution.

“The government needs to give aggressive tax benefits, such as deferrals on income taxes, to companies that decide to hire new employees amid economic difficulties from the coronavirus,” said Lee Man-woo a business professor at Korea University. “Tax support is crucial so that companies do not feel pressured by labor costs.”

Signs of a recession (KOR)