Social distancing is officially over

Social distancing is officially over

The LG Twins cheerleaders cheer for their home team at Jamsil Baseball Stadium in southern Seoul against the Doosan Bears during the KBO’s season opening game on Tuesday, also Children’s Day. [NEWS1]

Korean health authorities Tuesday declared an end to the country’s six-week social distancing campaign as daily infections of the coronavirus continue to flatline, saying a new national drive outlining everyday health guidelines for the “new normal” will kick off Wednesday.


In the so-called “everyday life infectious disease control” system — also dubbed the “distancing in everyday life” system — public areas that were closed due to the coronavirus pandemic will be allowed to gradually reopen as long as they abide by certain hygiene rules.

Businesses and individuals will be recommended to follow roughly the same health guidelines as in the previous social distancing campaign.

Korea's central government launched a two-week “high-intensity” social distancing campaign on March 22 and extended the campaign once to last until April 19. As Korea managed to flatten the curve of Covid-19 infections by April 19, the government dialed down the movement to an “eased” social distancing campaign from April 20 to Tuesday and said it would kick off the "distancing in everyday life" system Wednesday amid further signs that the outbreak was finally under control.

Korea added three new cases of the coronavirus Monday, according to the Korea Centers for Disease Control and Prevention (KCDC), the lowest figure since mid-February when a big hot spot was discovered in Daegu, which led to triple-digit increases. All three cases were patients who returned from abroad, meaning no new cases were detected locally. 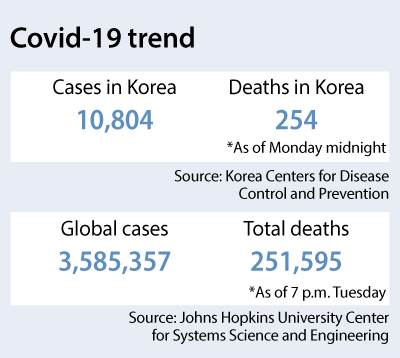 Yet Vice Health Minister Kim Gang-lip underscored during a press briefing Tuesday in Seoul that the start of the more relaxed distancing system doesn’t mean people are encouraged to return to their pre-Covid-19 ways, saying everyone should still keep an eye out for their own health.

The government warned last weekend that the social distancing campaign can be re-imposed if infections rise again.

Korea’s case load now stands at 10,804. By Monday midnight, 254 people had died, up by two from the previous day, while 9,283 people have been declared fully recovered, up by 66 from the day before.

Of Korea’s 10,804 total patients, 1,102, or about 10.2 percent, contracted the disease while overseas, mostly in Europe or the United States. The two regions, when combined, account for 85.2 percent of all infections from abroad, KCDC data shows.

While most local government offices took cues from central government authorities Tuesday to end their social distancing campaigns, Jeju Island announced it would separately extend theirs for two more weeks given the overwhelming influx of visitors lately.

Korea celebrated several holidays over the past week, and plane tickets to Jeju Island were mostly sold out for the weekend as many people who had planned overseas trips made detours to Korea’s largest island. Last Thursday was Buddha’s Birthday, Friday was May Day and today is Children’s Day.

Only 13 coronavirus patients have been detected in Jeju to date, making it the most Covid-19-free province in Korea, but Jeju officials now worry about infections from swarms of travelers.

Some 175,700 tourists landed on the island from last Wednesday to Monday, according to data from the Jeju Tourism Organization, far more than what officials had expected. When including arrivals for today, Jeju officials think the figure may rise to about 192,000 tourists.

One major concern is that some travelers didn’t wear face masks, flouting warnings from the Jeju government office.

“We’ve been monitoring the situation, and it seems about 60 percent of people at outdoor [spots] didn’t cover their faces,” an official from the Jeju office said Tuesday, adding that many tourists were also seen neglecting recommendations from the office to keep a physical distance from one another by at least a meter (3.3 feet).

“A lot of people from all over the country have visited Jeju recently, and we’re expecting more people to come in the future as well,” said Im Tae-bong, head of the Jeju government’s Bureau of Health, Welfare and Women. Im said the government would maintain its social distancing guidelines through May 19 and subsequently announce future guidelines.

Asked whether the central government plans to downgrade the country’s Covid-19 alert level from the current highest stage, Vice Health Minister Kim said Tuesday in the press briefing that authorities were discussing the matter.

“Even if the level gets downgraded to the third level, there won’t be many changes to policies related to the coronavirus, such as the five-day rotation system for face masks,” said Kim.

There are four levels to the country’s Covid-19 alert system, and the level was upgraded from the third to fourth level on Feb. 23, shortly after a huge cluster of infections was discovered in Daegu.

In the new set of everyday distancing guidelines, movie theaters, concert halls and baseball and football fields are strongly recommended to space out their customers and not hold any autograph or hand-shaking events that involve physical contact.

Department stores are being advised not to offer makeup samples, and restaurants and coffee shops are advised to encourage takeout services.

People at wedding halls and funeral parlors are advised to greet each other with nods, not handshakes or hugs, and meal services are recommended to be replaced with small gifts visitors can take home.