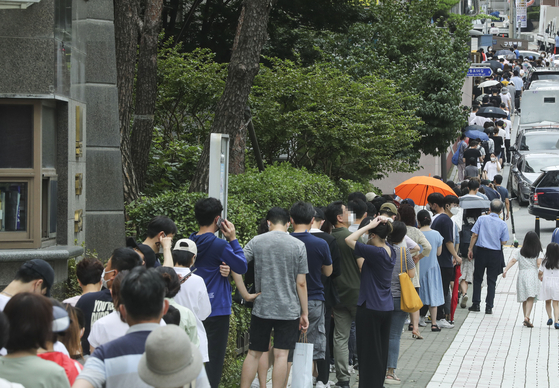 People wait in long lines to get tested for Covid-19 in Gangnam District, southern Seoul, after the country reported its second-largest daily number of new virus cases. [KIM SEONG-RYONG]


With new coronavirus cases shooting above 1,000 Wednesday — Korea's second-largest number ever in a single day — health authorities decided to extend the current social distancing rules in Seoul, Gyeonggi and Incheon by another week.

Prime Minister Kim Boo-kyum announced Wednesday that social distancing rules in the greater Seoul area, including a ban on private gatherings of more than four people and a 10 p.m. curfew for restaurants and bars, will be maintained until July 14.

They were supposed to be relaxed on Thursday in the greater Seoul area, which is under Level 2. Eased regulations are already applied in most other regions under Level 1 in a new system not yet applied to Seoul.

Kim warned that the strictest social distancing rules could be imposed if Covid-19 transmissions do not subside within two or three days.

The strictest level is Level 4, which would be applied in the greater Seoul area when the average daily Covid-19 patients reach 1,000 or more. Under Level 4, a maximum of two people can meet after 6 p.m. in public and all types of events are prohibited.

Moon instructed troops, police officers and civil servants to help with contact tracing efforts to quell the spike in infections.

On Wednesday, new coronavirus cases spiked above 1,000, signaling a fourth wave for Korea.

This is the highest figure since the peak of the third wave on Christmas day, when 1,240 patients were confirmed.

Of Wednesday's cases, 990 patients, or 84.8 percent, were from the greater Seoul area, with 357 coming from Seoul, 253 from Gyeonggi and 27 from Incheon. It was the first time daily cases from Seoul and its neighboring area topped 900.


The country added one more virus death, raising the death toll to 2,033.

Among major clusters, infections connected to bars in Mapo District in western Seoul and English hagwon (cram schools) rose to 314 as of Wednesday, including people infected with the more contagious Delta variant.

A new cluster broke out at the Hyundai Department Store’s Coex branch in southern Seoul, with a total of 47 people being infected so far.

Clusters at department stores are tricky because visitors enter without having to register with a QR-code or in a handwritten entry log, as is common for restaurants, bars and movie theaters. Health authorities sent out emergency text messages and urged anyone who visited the store from June 26 to July 6 to take Covid-19 tests. The department store announced that it would close from Wednesday to Thursday.

Another group of 41 infections was tied to an elementary school in Michuhol District, Incheon, Gyeonggi, including the students and their families.

Cases were also reported in the army. The defense ministry said Wednesday that 37 newly enlisted soldiers at the country’s biggest Army boot camp in Nonsan, South Chungcheong, tested positive for Covid-19. The military conducted tests on around 400 others to confirm any additional cases, and some 200 are waiting for the results.

Mass infections were also increasing in other major cities such as Busan, where 12 people were newly infected with the virus from a bar that offered dancing.

The southern port city announced it was raising its social distancing level to the new Level 2 from Thursday, which maintains a cap on meeting of up to eight people, but limits the operation of restaurants, cafes and bars to midnight. 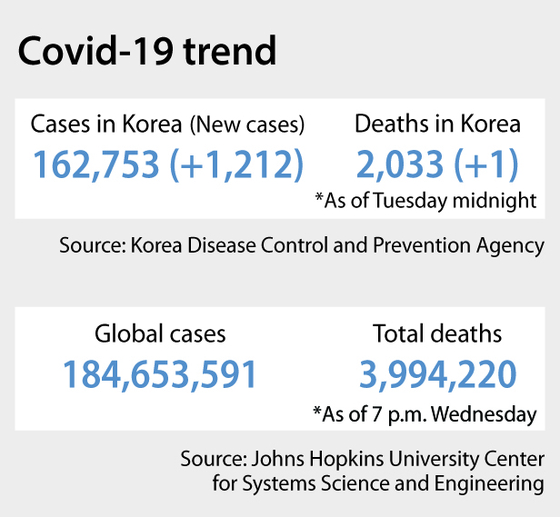 Seoul will reduce the operation of public transport by 20 percent after 10 p.m. to minimize the movement of people. That will start Thursday for buses and Friday for subways.

The capital city also issued a drinking ban outdoors from 10 p.m. to 5 a.m., including 25 parks, Han River parks and the Cheonggyecheon stream.

“The government considers the current situation as the early stages of a fourth wave,” Lee Ki-il, a senior health official said during a briefing on Wednesday.

While expanding the number of temporary testing sites, health officials urged the public to refrain from having social gatherings and get tested for Covid-19. 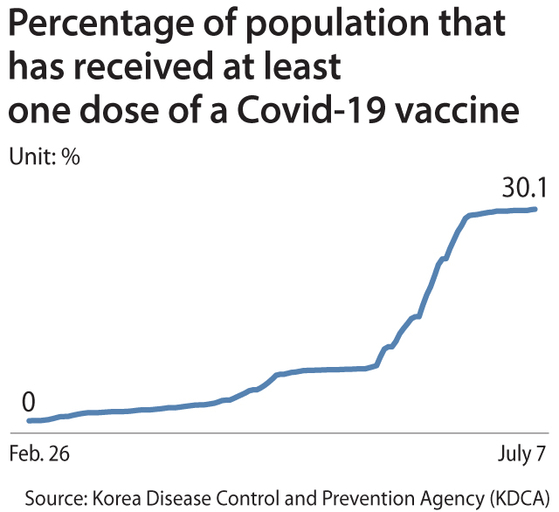