A line forms in front of a public health center in Gangnam District, southern Seoul, as people wait to get tested for Covid-19 on Thursday, when Korea's daily virus cases hit a record 1,275. [YONHAP]


The government’s top disease official says Korea has entered a fourth wave of the coronavirus pandemic, and its daily infection count could top 2,000 if the situation gets worse.

Korea reported its highest daily number of Covid-19 cases on Thursday, 1,275, according to the Korea Disease Control and Prevention Agency (KDCA).

That was the highest daily number since the very start of the pandemic, Jan. 20, 2020, when Korea confirmed its first coronavirus case. The previous record was 1,240 last Christmas day at the peak of Korea's third wave of infections. Korea's total caseload is now 164,028

“We believe that Korea is at the stage of entering a fourth wave with a sharp increase likely to continue for a while,” Jeong Eun-kyeong, commissioner of the KDCA, said in a briefing Thursday.

Jeong said the daily numbers could fall to the 260 to 415 range in late September if Korea's vaccination drive proceeds and people obey social distancing measures.

The commissioner warned about the spread of the more contagious Delta variant, which is common in India.

Over the past week, the Delta variant accounted for 12.7 percent of new cases in the Seoul metropolitan area compared to 4.5 percent the previous week.

“We cannot rule out the possibility of the Delta variant being the dominant strain in August,” Jeong said.

In Seoul, Gyeonggi and Incheon — the greater Seoul area — the number of new Covid-19 patients increased by an average of 68 percent compared to three weeks earlier.

Of Thursday’s record number, a total of 994 cases were in greater Seoul including 545 in Seoul, 388 in Gyeonggi and 61 in Incheon.

Among major clusters, infections connected to bars in Mapo District in western Seoul and English hagwon (cram schools) rose to 326 as of Thursday, including people infected with the more contagious Delta variant.

A cluster that began at the Hyundai Department Store’s Coex branch in southern Seoul infected 71 people so far, and the department store extended its closure to Monday.

A cluster traced to a restaurant in Yeouido, western Seoul, grew to 24 people, and 14 students were newly infected at a cram school in Seongdong District, eastern Seoul.

Another group of 47 infections was tied to an elementary school in Michuhol District, Incheon, Gyeonggi.

An outbreak among newly enlisted soldiers at the country’s biggest Army boot camp in Nonsan, South Chungcheong, has grown to 61 cases, and the military announced Thursday it would conduct tests on 4,000 soldiers.

The country added one more virus death, raising the total death toll to 2,034.

Prime Minister Kim Boo-kyum said during a parliamentary session Thursday that the country’s preventive measures are facing a “desperately dangerous crisis,” and the country’s virus situation is in a “very concerning” state.

“The government is considering raising the social distancing level to the highest level," Kim added, and discussions will be held as early as this Sunday.

Under Level 4, a maximum of two people can meet after 6 p.m. in public and clubs and bars that allow dancing have to shut down. All types of events are prohibited, while only relatives can attend weddings and funerals.

Health authorities said they are considering whether to impose the highest level on greater Seoul or just the city, minus Gyeonggi and Incheon.

“There are many factors to consider when raising the level to Level 4, as it imposes many restrictions on the economy and living." 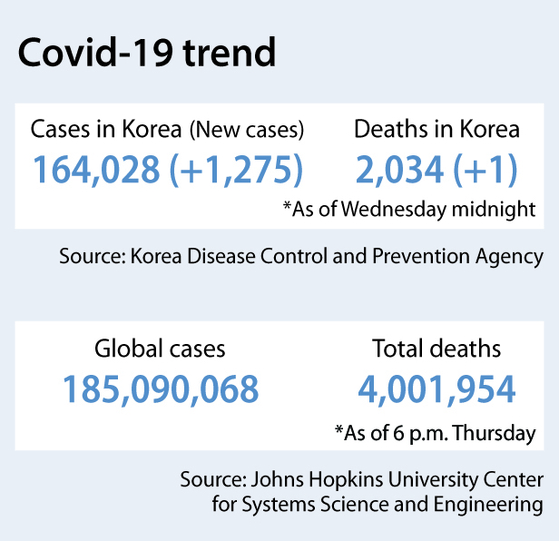 Spikes were also seen in other major cities and regions. Chuncheon was put under Level 3, including a ban on private gatherings of more than four people and a 10 p.m. curfew for restaurants and bars.

Busan and Daejeon also raised their social distancing level to the new Level 2, which puts a cap on meetings of up to eight people, and limits the operation of restaurants, cafes and bars to 11 p.m. in Daejon and midnight in Busan starting Thursday.