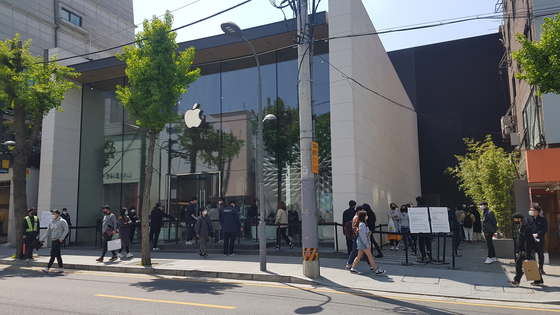 At Korea’s only Apple store, in Garosu-gil, Gangnam in southern Seoul, customers line up to enter the establishment Thursday. [KANG JAE-EUN]


Normally-bustling Garosu-gil in Gangnam, southern Seoul, was eerily quiet 10 days ago, except for one long and enthusiastic line.

It was in front of the Apple store.

The outlet was the first outside of mainland China to reopen after the Cupertino, California-based company shut its 500 stores worldwide, and the reopening was seen as a test for Apple as it worked to bring its retail network back online globally.

On April 18, the Apple store in Garosu-gil reopened, 35 days after the company decided to shut all of its stores globally to prevent the virus from spreading. Korea’s success in containing the virus was one of the reasons it was chosen as the site of the return.

“Korea has shown great progress during the spread of Covid-19, and we’re excited to announce the re-opening of Apple Garosugil,” the company said in a statement that it released on April 16.

Two days later, with daily confirmed cases in the country dropping into the single digits, the store flung the doors open. The move came as Koreans were just starting to gather and church services were starting to be held again.

On April 22, the Korea JoongAng Daily visited the site. The store was operating like clockwork.

Customers were wearing masks and standing the regulated two meters (6.6 feet) apart, the distance clearly marked in red on the rope barrier in front of the store.

Temperatures were checked on the way in, and four questions were asked. 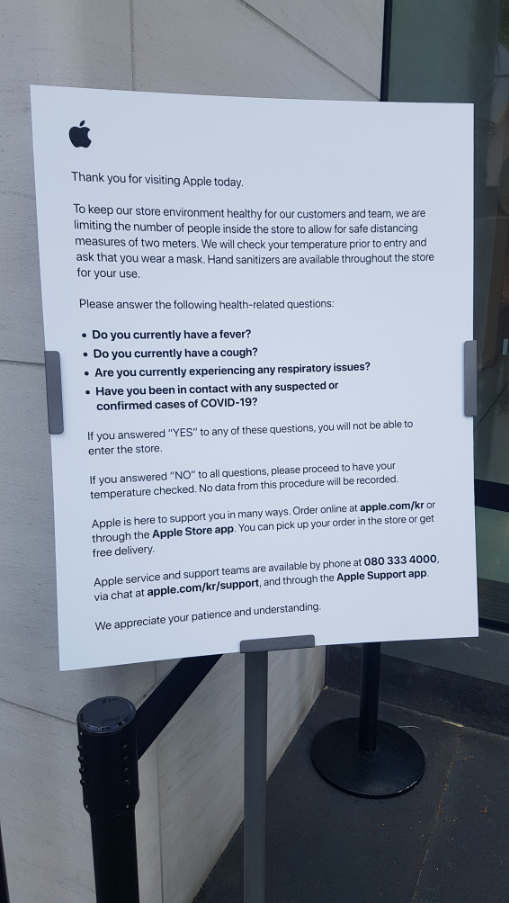 “Do you have a fever or a cough? Have you been in contact with anyone suspected of or confirmed to have Covid-19?” an employee asked. They also asked if the customer has respiratory issues.

Signs with the questions were posted in English and Korean.

“Sanitize your hands with hand sanitizer before coming in, please,” a store employee said to those entering.
With all the procedures, it took 30 minutes to get in the door.

Visitor numbers were being tightly controlled. About 40 people were behind the glass facade of the futuristic 1,300-square-meter (13,993-square-foot) shop, and of those, about half were Apple employees.

Though they were allowed to fiddle with the available devices, each customer was shadowed by one employee. When they had a question, the employee would answer safely from across Apple’s one-meter-wide signature wooden display tables.

Some of the customers were eager to get their hands on the second-generation iPhone SE, the company’s latest budget smartphone. A store employee said the product had not arrived yet.

“There were some issues with the battery of my MacBook when I first bought it. I had to wait a month to get it repaired due to the coronavirus,” said Jeong Hyeong-jin, a man in his 30s from Noryangjin-dong, southern Seoul. “After I heard the store opened, I made a reservation and came here to get the battery replaced.”

The demand was especially high because so many people have been forced to work or study at home, according to Apple’s spokesperson who requested anonymity.

“A focus for the store will be service and support at the Genius Bar,” Apple said in a statement.

Customers who were at the store said they were impressed with Apple’s focus on protecting customers.

“I was surprised how vigorously the employees were cleaning things in the store,” said Jeong Seon-ki, a 44-year-old, who was visiting with two children. She said that the Apple team immediately swooped in after her son sat on a stool and wiped down the surface.

Even with all the planning, execution was not perfect.

Collisions between customers were observed at the entrance, due to a chokepoint created by all the security measures. Some employees were seen leaning in a bit too close in demonstrating devices. Some devices were not cleaned after visitors put them through the paces.

Reopening day itself did not go all that smoothly, according to reports from the day. Some customers were confused about the process, with more than a few walking away frustrated.

Apple is on full alert as its budget iPhone SE will be available here on May 6, which could draw huge crowds.

“Nothing has been decided yet, but I assume similar disinfection measures will be in place in May for the launch of our new smartphone,” said a store employee. “However the large crowd that might come on that day is a bit worrisome.”

The establishment in Garosu-gil, opened in January 2018, is the only location directly managed by the company. Customers can purchase and experience products at 98 official resellers, including Frisbee and A Shop.

Despite other stores, people still gather at the flagship Garosu-gil site.