Illegal immigrants in Korea shouldn’t be fearful of getting deported if they need a coronavirus test, Prime Minister Chung Sye-kyun said Wednesday.


In a meeting of the Korean central government’s Covid-19 command center in Seoul, Chung urged local government offices and health care workers to consider the estimated 380,000 undocumented immigrants in Korea and make sure they get face masks and medical care “without any fear of their [legal] status.”

“There’s a high chance they may not visit a coronavirus testing center even if they have symptoms [of the virus] because they’re afraid about their status,” Chung said, “and this may lead to local transmissions of the disease any time."

“If [authorities] accuse them of being illegal immigrants and track them down, they will go deeper into hiding, and concerns about [a mass infection] blind spot will only amplify,” Chung warned.

Chung’s remarks came on the heels of a comment from Yoon Tae-ho, another member of the Covid-19 command center, who said Tuesday that the central government has recently been examining ways to control infections among the most socially vulnerable, including homeless people and undocumented foreigners.

Specific details of the plan, said Yoon, will be announced later this week. 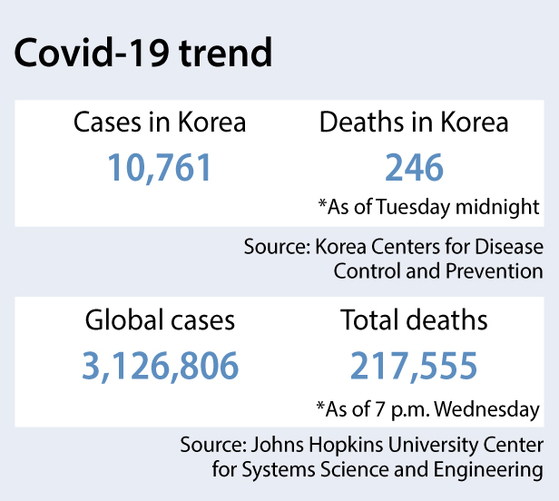 Korea counted nine new Covid-19 patients Tuesday, down from 14 cases Monday, bringing the total case load to 10,761, according to the Korea Centers for Disease Control and Prevention (KCDC).

By Tuesday midnight, 246 people had died, up by two from the previous day, while 8,922 people have been declared fully recovered, up by 68 from the day before.

Of Tuesday’s nine new cases, five were imported. Among Korea’s total 10,761 patients, 1,061, or about 9.9 percent, contracted the disease while overseas, mostly from Europe or the United States, KCDC data showed.

With three holidays coming up, the Covid-19 command center once again pleaded with the public Wednesday to abide by health guidelines and called on local government offices in tourist destinations to make sure their visitors keep a social distance from one another and wear face masks.

Buddha’s Birthday is today, May Day is on Friday and Children’s Day is next Tuesday.

Plane tickets to Jeju Island, a popular getaway off the southern tip of the nation, have mostly sold out for the weekend, with the Covid-19 command center expecting some 180,000 people to visit the island from today through Tuesday. That’s a 43 percent drop from the same period last year, but still large enough to raise concerns, health officials said.

Jeju Island has had only 13 coronavirus patients to date, making it the most Covid-19-free province in Korea.

As a precautionary measure, the command center said Wednesday it has decided to reduce the temperature threshold for allowing visitors to leave Jeju International Airport without a virus test from the previous 37.5 degrees Celsius (99.5 degrees Fahrenheit) to 37.3 degrees Celsius. That means if a visitor’s temperature is above 37.3 degrees Celsius, he or she has to be tested at the airport and self-quarantine at their hotel till they receive their results, a Jeju official explained Wednesday.

If the test result comes out negative, they will be allowed to travel around the island. If it turns out positive, they’ll be hospitalized.

On another front, the Daegu Traditional Market Service Agency announced Wednesday that Seomun Market’s nighttime market, which has been closed since Feb. 21 after a huge cluster was discovered at a church in Daegu will reopen Friday from 7 p.m. to midnight.