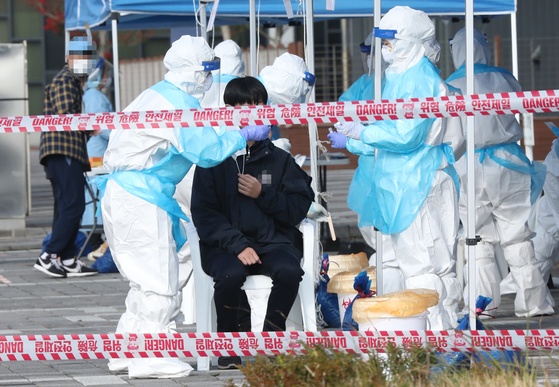 Students attending an international school in Jeju receive Covid-19 tests from a local clinic after a student at the school tested positive. [YONHAP]


Korea’s total confirmed Covid-19 cases surpassed 30,000 Friday, after daily infections topped 300 for the third consecutive day in what health officials have acknowledged is a "third wave" of the disease in the country.

Prime Minister Chung Sye-kyun addressed the nation Friday, urging the public to avoid public gatherings and stay home through the end of the year.

“If we do not reverse the spread now, then our daily lives will once again be restricted, while the self-employed and small business owners will again face great difficulty,” Chung said, comparing the current situation to the first wave of coronavirus infections that hit the country in February and March.

That initial outbreak was concentrated in the southeastern city of Daegu and neighboring North Gyeongsang after mass contagion occurred among believers of a fringe Christian sect.

But on Friday the total number of cases in Seoul outstripped Daegu for the first time — with 132 new cases detected in the capital — highlighting the alarming rate at which cluster infections have popped up as the weather gets colder.

Experts say a “third wave” has already started, succeeding a second wave that emerged in the greater Seoul area in August and September.

Health officials acknowledged as much on Friday, with Yoon Tae-ho, an official from the Central Disaster Management Headquarters, noting in a press conference Friday that a “resemblance of a mass contagion” is becoming apparent in Seoul, Gyeonggi and Incheon.

“Should the rate of new patients not subside, and the one-day average of new patients over one week exceed 200 […] we will consider escalating the social distancing level to Level 2, even if two weeks haven’t passed,” Yoon said.

The talk of raising the country’s five-tier social distancing level by another notch, just three days after the capital was already put on Level 1.5, underscores concern among officials of the outbreak spinning out of control as the year draws to a close.

For the greater Seoul area to be upgraded from Level 1.5 to Level 2, there must be an average of 200 patients or more in Seoul, Incheon and Gyeonggi combined per day over a two-week period.

The city of Suncheon in South Jeolla has already imposed Level 2 — the first locality in the country to do so — after several local chains of infections were detected.

At Level 2, bars and other nightlife businesses have to close, while restaurants and cafes at least 150 square meters (1,615 square feet) in size can only offer takeout service after 9 p.m. 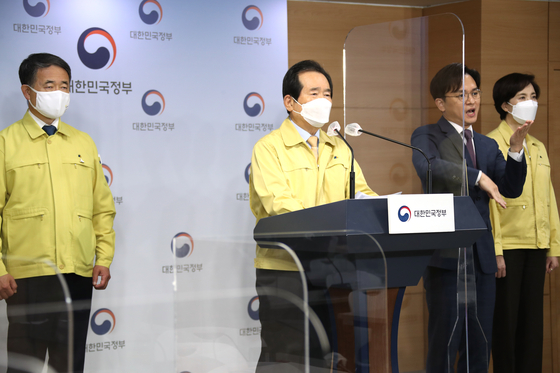 Prime Minister Chung Sye-kyun, center, delivers a public address Friday urging people to refrain from public activities for the remainder of the year, as experts say the country has entered a "third wave" of coronavirus cases. [YONHAP]


Most of the new infections found around the country have been concentrated in clusters emerging from small gatherings or at public facilities. The neighborhood of Sinchon-dong in western Seoul has been put on high alert after a series of infections have been detected among university students attending prominent colleges in the area.

At Yonsei University, 17 students and their family members were infected in the wake of a gathering of engineering students, while neighboring Sogang University shut down most of its facilities after one infected student attended a lecture. Hongik University, also located in the vicinity, has also yielded one patient — a student living in the school’s dormitories.

Noting how quickly the disease is spreading among young people in particular, Prime Minister Chung urged them to refrain from contact-related activities in the remaining year.