Unemployment cash for those who fall through safety net

Unemployment cash for those who fall through safety net 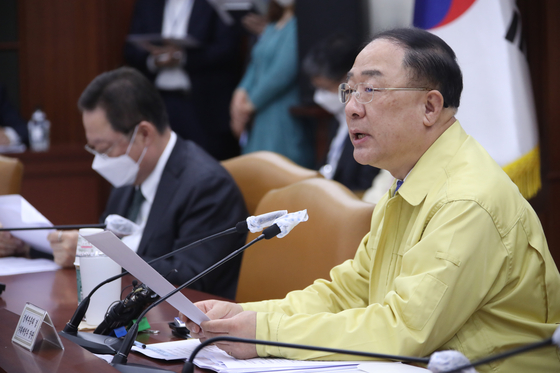 Finance Minister Hong Nam-ki, right, announcing the conditions to applying the government's three month allowance for people that are denied access to unemployment benefits and employees of small companies that have been on furlough on Thursday, central Seoul. [YONHAP]

About 930,000 special-type workers with no access to unemployment benefits — door-to-door workers, freelancers and the self-employed — will be receiving a three-month special allowance.

The allowance will also be granted to employees on furlough as long as their employers have 50 or fewer employees.

Two qualifying methods are being made available: monthly income of less than 150 percent of the nation's median income — 7.12 million won for a family of four and 2.63 million won for a person living alone — or annual income under 70 million won.

Applicants at the median household income or under need to show that their income has dropped at least 25 percent, comparing the December 2019 and January 2020 period to the March and April period this year. The same rule applies to those whose annual income is 50 million won or less.

Furloughed employees have to have been out of work for 45 or more days or at least 10 days per month.

The government will accept applications June 1 through July 20. If approved, applicants will receive funds within two weeks.

“The government has decided to create a temporary emergency employment stabilization aid program of 1.5 trillion won as an employment safety net for workers who are in the blind spots,” said Finance Minister Hong Nam-ki during a second central economic management headquarters meeting on Thursday.

On May 4, the government said it would cover 940 billion won of crisis expenditures from its own coffer while the rest will be funded through the third supplementary budget.

The government also outlined the details to the "Korean New Deal." Jobs created under the Korean New Deal will be related to digital infrastructure including data, 5G and artificial intelligence (AI).

This includes early establishment of 5G networks and its early adoption in manufacturing as well as smart city technologies from safety to traffic controls. The government will also focus on fostering the non-contact industries, such as mobile public health care services and AI-based platforms for remote education.

The New Deal includes the digitalization of social infrastructure, such as outdated national facilities, and the establishment of a digital logistics service. The details of the plan will be announced next month.

“The Korean New Deal could be summarized in focusing on projects that create digital-based jobs and speeding up economic innovation resulting from the economic and social structural changes brought upon by Covid-19,” Finance Minister Hong said. “More specifically it will be a large-scale innovation project that will directly relate to reinforcing competitiveness and productivity in a wide area while have huge synergy effects with investment from the private sector."

During the same meeting on Thursday, Finance Minister Hong emphasized that the government will focus this month on restoring the economy.

“The central economic headquarters considers the month of May as the ‘golden time’ in recovering the economy,” Hong said. “Within May, we will develop policies including the economic policies for the second half, the third supplementary budget and the directions of the Korean New Deal.”

The policies will also include measures that would stimulate investments and spending.

“We’re at a point in desperate need of recovering economic confidence, reviving the spending power and restoring the weakened economic vitality,” Hong said.

Since Wednesday, the government has eased its strict social distancing campaign as the number of confirmed cases has dropped sharply.

For the last three days, the daily number of confirmed cases has fallen below five. On Thursday, only one locally-infected case was confirmed, the first in four days.