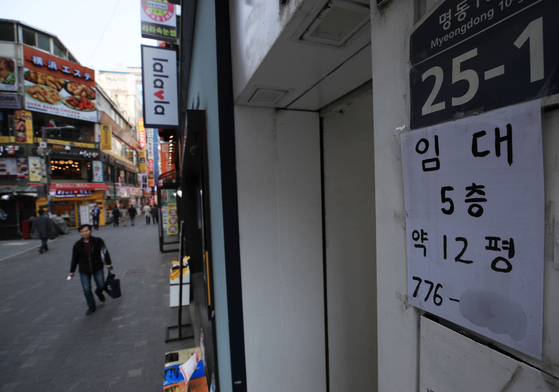 A store in Myeong-dong, central Seoul, on April 29 seeks tenants as small businesses have been hit hard by the coronavirus pandemic. As a result, the government's corporate tax collection has shrunk. [YONHAP]


The Korean government's deficit grew sharply in the first quarter of 2020, with struggling businesses pulling down tax revenue while the government has spent heavily to offset the economic fallout from the coronavirus pandemic.

The government’s consolidated balance from January through March amounted to a 45.3 trillion won ($37 billion) deficit, according to a report released by the Ministry of Economy and Finance on Thursday. That’s a 162 percent increase from the 17.3 trillion won deficit recorded during the same period a year ago. In March alone, the deficit nearly quadrupled on year, from 5.5 trillion won to 19 trillion won.

With two new supplementary budgets in the works, the government is expected to soon add around 40 trillion won in new spending.

The government cited its policy of allowing businesses to postpone corporate tax payments, which many have pursued as the impacts of the coronavirus outbreak have made it difficult for many of them to pay their bills.

Value-added tax revenue shrank on year by 14.9 trillion won, or 7.5 percent, in the first quarter, indicating that people were spending less as they followed the government's strict social distancing guidance.

Government spending, meanwhile, increased significantly as it worked to contain the spread of the virus while attempting to defend the economy.

The government spent 164.8 trillion won in this year's first quarter, a 19 percent increase compared to a year ago.

In March, the government spent 60.8 trillion won, a 24 percent increase on year.

The burden is expected to increase further with the additional two supplementary budgets.