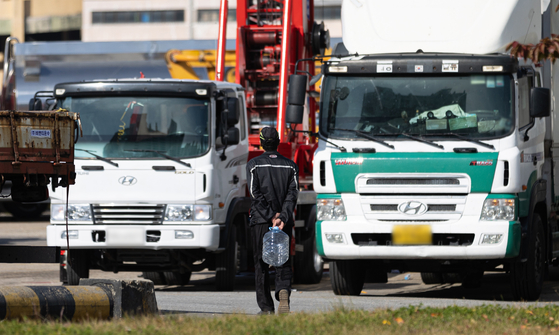 (A driver walks toward parked trucks with an empty bottle of urea solution at a terminal in Yangcheon District, Seoul, on Sunday. [NEWS1]

The government said Sunday that 20,000 liters (5,280 gallons) of urea, the main component of diesel exhaust fluid (DEF), will be flown in by military aircraft from Australia this week.

Officials added that Korea is using all of its diplomatic channels to secure urea, not only from China, which is the biggest supplier accounting for more than 60 percent last year, but also Vietnam.

Additionally, starting Monday, all hoarding of urea or DEF will be banned. Anyone that hoards DEF will be faced with a fine of up to 100 million won ($85,000) or imprisoned for up to three years. The government said the crackdown will be applied until the end of the year.

DEF retailers that have stocked more than 110 percent of their average monthly sales will also be considered hoarders, as will retailers who have stock, but not sold any imported or manufactured DEF for 10 days.

The Ministry of Land, Infrastructure and Transport on the same day announced that it will suspend a crackdown on vehicles that have illegally tampered with the emissions reduction system until the current urea shortage is resolved.

The ministry in a statement said the decision to suspend is crackdown is so that it could focus on improving the supply of urea, including cracking down on hoarding the emission reduction fluid.

Urea is the main component of DEF, an essential product that cuts emissions in diesel-powered vehicles.

Diesel-powered passenger cars and trucks that were released after Jan. 2015 are equipped with a Selective Catalytic Reduction (SCR) system, which is designed to reduce nitrogen oxide emissions.

Cars with the SCR system require DEF, which is injected into the exhaust stream of the vehicles, and stored in a reservoir separate from the fuel tank to help convert nitrogen oxide into nitrogen and water.

The shortage comes after China tightened export restrictions on fertilizers, including urea, which is extracted from coal, last month.

Korea’s relies on China for urea. According to the Korea International Trade Association (KITA), China accounted for 66.1 percent of urea imported to Korea. Indonesian supplies came in second at 13.8 percent and Qatar accounted for 10.5 percent.

Many cargo trucks, which were the first to hit, have been forced out of service due to the shortage, which has also impacted heavy machinery at construction sites and parcel delivery trucks.

The government has denied reports that it has been slow to respond to the shortage, noting that its overseas offices have been monitoring the urea situation since late October and that the Trade Minister held a meeting with the Chinese Ambassador to Korea on Oct. 29.


It also noted that government meetings were held on the issue on Nov. 2 and Nov. 4.

In a statement on Friday, the Trade, Industry and Energy Ministry said it has been communicating with related industries to stabilize the urea supply.

Some people have taken matters into their own hands.

On Friday three containers, each containing 10 liters of DEF, were left front of fire station in Incheon. On the same day, three bottles were also left at a fire station in Jeonju, North Jeolla.

The woman who delivered the bottles in Jeonju reportedly told firefighters that the fire trucks shouldn’t be prevented from operating due to the shortage of urea.

Currently, some 2 million trucks and 2 million diesel-powered passenger vehicles are estimated to require DEF in Korea.