Korea to take helm of cooperative efforts to combat virus

Korea to take helm of cooperative efforts to combat virus 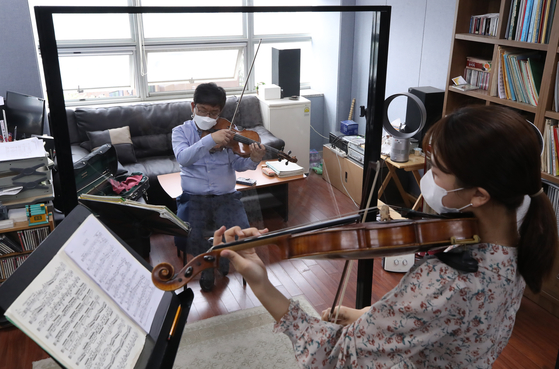 A music professor at Seoul National University instructs his student in viola while separated by a transparent divider set up to abide by social distancing guidelines. [YONHAP]


Korea will take the helm of global cooperative efforts to combat the coronavirus by leading multilateral discussion groups in the United Nations, said Seoul’s Ministry of Foreign Affairs Thursday.

A ministry official told reporters that Korea proposed to form “Friends Groups” at the UN, World Health Organization and Unesco to share its successes in suppressing Covid-19 domestically.

The groups Seoul will seek to spearhead these organizations will deal with promoting global solidarity in the fields of health and contagious disease prevention.

The UN Friends Groups will be launched first within this month, and will hold its first meeting in New York next week, the official said.

Around 30 countries said they were interested in joining the UN group, which includes member states hit hard by the Covid-19 pandemic, the official added. The United States and China have yet to officially join, but have expressed keen interest.

Korea’s leadership in promoting global cooperative efforts against the coronavirus gained momentum thanks to its success in containing the virus.

The country’s thorough and rapid testing, facilitated by a well-established digital communications network, has received worldwide attention and prompted various countries to emulate its model.

The number of daily new infections in Korea dropped below 20 in late April, allowing the government to officially ease its social distancing campaign on Tuesday.

On Thursday the country recorded only four new infections, but one of them was domestically contracted, the first such case in four days. This put the total number of cases in the country at 10,810.

One more fatality was also reported, putting the death toll at 256.

Alarmingly, however, the single domestic patient — a 29-year-old man from Yongin, Gyeonggi — had ignored health recommendations and gallivanted around many different places across the country, coming into contact with at least 57 different people, health authorities said.

One of this patient’s friends, with whom the patient took a trip with to Hongcheon, Gangwon, over the holidays last week, has already tested positive.

On Saturday, the patient even partied at a nightclub in Itaewon, central Seoul, hours before he developed a high body temperature of 39 degrees Celsius (102 degrees Fahrenheit).

“Because the longest incubation period for the virus is 14 days, the number of people [the patient] has had contact with could very likely be more than 57,” said Kwon Joon-wook, deputy director of the Korea Centers for Disease Control and Prevention (KCDC).

Kwon vowed the government would do its best to track down everyone the patient had contact with, noting a recent study that showed Korea had been successful in controlling the virus domestically due to its ability to identify at least 90 percent of people patients had contact with.

Early last month the government ordered all nightclubs, hostess and karaoke bars and other nighttime establishments in Seoul to close after a hostess in southern Seoul tested positive. Most clubs eventually reopened after the government ended its high-intensity social distancing campaign 12 days later, but the strict hygiene recommendations remained in place along with warnings that clubs could face shutdowns if they did not abide by the guidelines.

The Itaewon club in question said in a social media posting it had enforced safety measures like temperature checks upon entry. Whether new infections are discovered with relation to the club could show how effective such measures are at a time when youths in Korea are enjoying a return to nightlife.