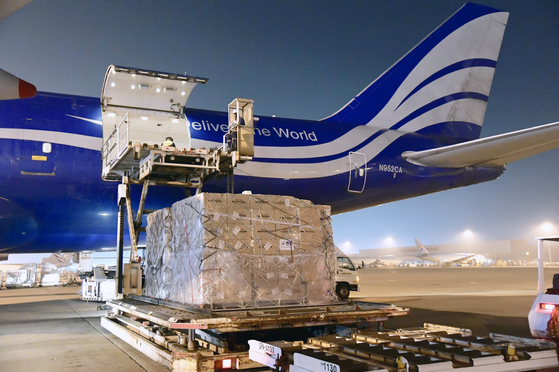 Masks are loaded onto a U.S. cargo plane at Incheon International Airport early Monday to be delivered to the United States. Korea said it will send 2 million face masks to be used by U.S. medical workers as a part of efforts to support its ally and efforts toward joint Covid-19 response. [U.S. Embassy]

Korea sent 2 million face masks to the United States for emergency assistance as a part of joint efforts to respond to the coronavirus pandemic on Monday.

The Korean Ministry of Foreign Affairs said in a statement that the mask delivery is “a result of a comprehensive consideration of Korea’s domestic Covid-19 situation, and the need for support for our ally, the United States.”

The masks, intended to be supplied to U.S. medical workers, were transferred on a U.S. cargo plane and departed from Incheon International Airport early Monday morning.

"We hope that Korea and the United States will quickly overcome the shared Covid-19 challenge through such support, and that this can contribute to sharing Korea's quarantine experience with the international community,” the Foreign Ministry said.

U.S. Ambassador to Seoul Harry Harris tweeted early Monday a “BIG thank you” to the Republic of Korea and the Blue House “for providing 2 million face masks” to the U.S. Federal Emergency Management Agency (FEMA).

“Our alliance and friendship are as vital and ironclad today as it was 70 years ago,” Harris added, also sharing several photos of the masks being transferred to a plane.

Last Friday, Harris also tweeted a message thanking the Korean Ministry of Patriots and Veterans Affairs “for 500,000 N95 masks donated to” the U.S. Department of Veterans Affairs to be distributed to 1950-53 Korean War veterans in the United States.

South Korea last Thursday announced it is sending 1 million face masks to elderly veterans in 22 countries that participated in the Korean War, including the United States, as this year marks the 70th anniversary of the beginning of the three-year conflict on June 25, 1950.

Since early March, Korea has been rationing masks because of shortages. It has also prohibited overseas exports of masks.

However, Seoul’s Ministry of Food and Drug Safety announced Thursday that the government plans to expand overseas supply of Korea-made masks overseas for humanitarian purposes. Some 70 countries have officially requested masks from Korea. The ministry said that it will take into consideration when accepting the requests which countries are most impacted by Covid-19 and in most urgent need because of weaker health and quarantine systems. It will also prioritize countries because of diplomatic and security reasons.

The United States is the hardest-hit nation in the world by the coronavirus with over 1.32 million confirmed cases and more than 79,500 reported deaths as of Monday.

Hospitals in the United States have suffered from shortages in personal protective equipment amid the ongoing pandemic. The U.S. Centers for Disease Control and Prevention began recommending that Americans wear masks or some face coverings in public in early April but said that surgical masks are critical supplies that should be reserved for health care and other frontline workers.