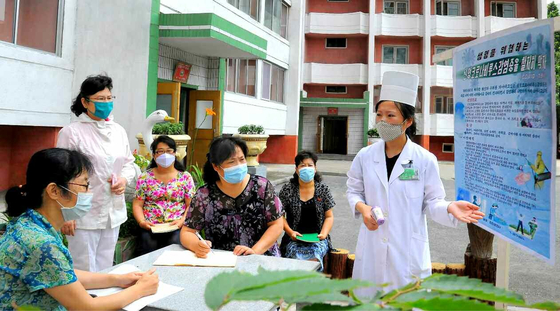 Kang Hyon-chol, identified as a senior researcher at the North's Association for the Promotion of International Economic and Technological Exchange, accused the United States of using humanitarian aid as a "smokescreen" for bringing up human rights and interfering in the internal affairs of other countries.

In an English-language statement released on the North Korean Foreign Ministry website Monday, Kang accused the United States of attempting to "abuse these sufferings and pains" for ulterior motives as the world faces "severe economic difficulties because of the Covid-19 pandemic."

Kang continued, "This vividly reveals that the American ulterior intention of linking 'humanitarian assistance' with 'human rights issue' is to legitimize their pressure on the sovereign states and achieve their sinister political scheme."

He said the United States had over 34.7 million Covid-19 cases with a death toll as high as 620,000, "putting their people into great despair and agony," then criticized gun-related crime, hate crimes and widespread racial discrimination in the United States.

The United States had over 33.85 million total cases and 607,156 deaths as of Monday afternoon, according to the Johns Hopkins University's Coronavirus Research Center.

Kang added that many countries "have undergone bitter tastes as a result of pinning much hope on the American 'aid,'" alleging that Washington does not provide assistance to countries that don't help to realize U.S. foreign policy, citing as one example "regional security issues" such as in the South China Sea.

North Korea officially claims it has no confirmed Covid-19 cases. The country was quick to shut its borders at the beginning of the pandemic in January 2020.

However, North Korean leader Kim Jong-un in a Politburo meeting at the end of last month punished senior officials for neglecting their duties in carrying out measures needed to fight the pandemic and causing what was described in state media as a "great crisis."

North Korea has yet to receive around 1.99 million doses of coronavirus vaccines allocated by the Covax Facility, the global vaccine-sharing mechanism led by the World Health Organization (WHO) and Gavi, the vaccine alliance.

The vaccines had initially been set to arrive during the first half of the year, but a Gavi official told Voice of America earlier this month that North Korea has not been complying with administrative steps required for the delivery.

North Korea accused some countries of hoarding coronavirus vaccines at the World Health Assembly in late May, in an apparent jab at the United States.

The Institute for National Security Strategy (INSS), a think tank under the South's National Intelligence Service, said in a report last Friday that North Korea has rejected AstraZeneca vaccines that were to be delivered through the Covax Facility due to concerns about potential side effects.

Instead, the North appears instead to be opting for Russian-made vaccines. North Korea appears to be reluctant to receive Chinese coronavirus vaccines, which it deems unreliable, the INSS added.

The INSS said that North Korea has yet to secure Covid-19 vaccines.

It noted that mRNA vaccines that require tricky cold chain storage such as ones by Pfizer and Moderna would be difficult to store and distribute in a country like North Korea due to unstable power supply.

The Joe Biden administration late last month stepped up U.S. Covid-19 vaccine diplomacy efforts, pledging 80 million doses both through the Covax Facility and directly to countries in need. While no promises have been made, Washington has signaled that it is open to humanitarian aid to Pyongyang, which could possibly include vaccines.

The South Korean government has stressed it is willing to cooperate with the North on Covid-19 vaccine supplies should Pyongyang agree, a topic President Moon Jae-in personally raised in a trip to Austria earlier this month.

The Biden administration since the completion of its North Korea policy review at the end of April has signaled it is open to diplomacy with Pyongyang. However, it has also been vocal about North Korea's human rights abuses, an issue Pyongyang has reacted sensitively to.