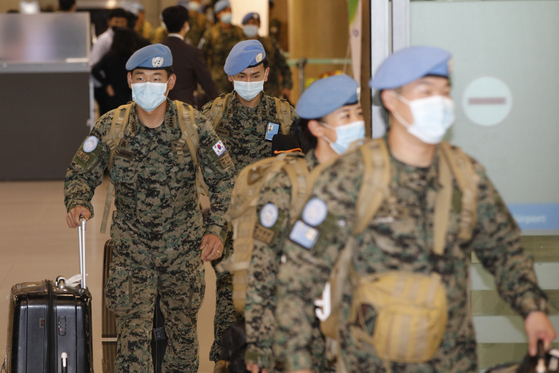 Soldiers from Hanbit Unit, Korea's peacekeeping troops in South Sudan, arrive at Incheon International Airport on March 28, completing their eight-month mission. The 12th batch of the Hanbit Unit departs for their rotation on a chartered flight next week after travel delays amid the coronavirus pandemic. [NEWS1]

In an innovative flight arrangement amid coronavirus travel restrictions, Korean rotational troops to be deployed in South Sudan are set to fly into Africa next week while overseas nationals in Ethiopia will be able to depart on the same chartered plane.

The Hanbit Unit, the United Nations peacekeeping troops deployed by the Korean military in South Sudan, was due to make a layover in Addis Ababa to make a much-delayed rotation, and once this became known, the Korean Embassy in Ethiopia made hasty arrangements Monday to fly out overseas residents and students grounded amid the coronavirus lockdown.

According to the Korean Ministry of National Defense and Ministry of Foreign Affairs Tuesday, the embassy in Ethiopia began surveying overseas residents to tally how many people wished to return to Korea. A Boeing 777 chartered plane can carry up to 300 passengers.

These overseas Koreans are expected to depart from Ethiopia’s capital of Addis Ababa to Incheon International Airport on the evening of May 20.

The 300-strong Hanbit Unit was supposed to replace the previous contingent in South Sudan which wrapped up their assignment on March 9. But the South Sudanese government requested for a delay in the rotation amid the coronavirus pandemic.

South Sudan in March 24 implemented entry bans on all foreigners. The 11th batch left only minimal personnel, and the rest of the troops returned to Korea via Addis Ababa on March 27. Meanwhile, the 12th batch has been on standby in Korea awaiting their new deployment schedule.

The Hanbit Unit previously entered South Sudan with layovers in Abu Dhabi in the United Arab Emirates and Entebbe in Uganda. However, entry bans on foreigners over coronavirus concerns in these countries has blocked this route since March. Thus, the Korean government reviewed a new route with a layover in Addis Ababa, as Ethiopia has yet to impose an entry ban on Korea.

Korea has deployed the Hanbit Unit to South Sudan since 2013 upon the request of the United Nations to assist peacekeeping operations in the war-torn country. The unit usually rotates every eight months.

A Korean government official said Tuesday, “As African countries have been under lockdown, there have been repeated flight cancellations because the direct Ethiopian Airlines flight between Addis Ababa and Incheon have been run only when a minimum number of passengers have been met since April,” adding this is “welcome news for our nationals stranded there.”

The 12th batch of peacekeeping troops will enter South Sudan in two groups. The first chartered plane carrying the troops is expected to depart from Incheon International Airport on May 18. After landing in Addis Ababa, the plane is expected to undergo maintenance for one day and depart on May 20, carrying the overseas Koreans back to Incheon.

The second group of Hanbit troops is expected to fly out in early June and bring the remaining personnel from the 11th batch.

A military official said, “Through cooperation between agencies, instead of bringing back an empty plane, we are able to bring back our overseas nationals.”

As of Tuesday, the Foreign Ministry said that it has supported 27,704 nationals in 99 countries return to Korea amid the pandemic.