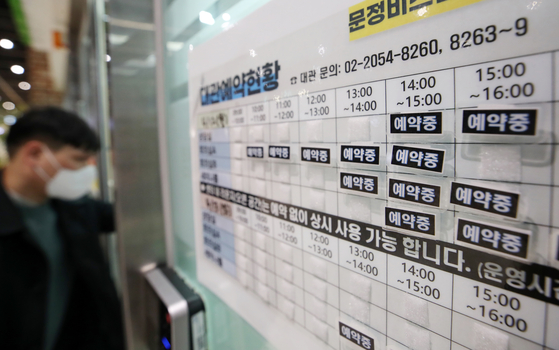 A bulletin board filled with reservations on unemployment paycheck consulting at a job center in Songpa, Seoul, on April 12. [YONHAP]


Unemployment insurance subscriptions increased 2.3 percent on year in March, according to the Ministry of Employment and Labor on Monday.

The number of people covered increased 322,000 to 14.08 million. This is nearly double the 192,000 that were added to the list in February.
Increases in these numbers are often associated with the recovery of employment and can be seen as a leading indicator of an economic rebound.

The ministry said improvement in consumer sentiment and the expansion of online and non-contact services amid Covid-19 boosted hiring, which increases the number of people on the rolls.

"Covid-19 damages on services, especially those that have direct contact with customers, is showing signs of reducing as a result of inoculations and growing expectations of an economic recovery," said Kim Young-joong, head of the Employment and Labor Ministry's employment policy office.

The government said strong exports, particularly of semiconductors, consumer electronics, fuel cells and automobiles, contributed to an increase in jobs in manufacturing.

Exports have been growing for five consecutive months since November last year. It is the first five-month run in three years.

Last month, exports grew at 16.6 percent on year, the fastest pace in two and a half years.

The trend is holding.

According to the Korea Customs Service on Monday, in the first 10 days of this month, exports grew 24.8 percent to $15 billion.

Exports of semiconductors in the first 10 days of this month grew 25 percent, while automobile exports were up 30 percent. Exports of mobile telecommunications equipment, which includes smartphones, rose 52.2 percent.

Most of those in services added to the list are workers in health, welfare and public services.

Some 110,000 in health and welfare were newly added, while some 38,000 in public administrative were newly subscribed to employment insurance.

Restaurants, hotels, arts and sports, which are areas most affected by the ongoing pandemic, continued to suffer.

In the restaurant and lodging businesses, 35,000 subscribers fell off the employment insurance rolls, which indicates a loss of jobs. The decline has been ongoing for 11 consecutive months.

Last month, 59,000 people fewer were on this list in these businesses.

Nearly 1.18 trillion won ($1.04 billion) was paid out in unemployment benefits in March, the second most since last July's 1.19 trillion won.

The number increased, the government argued, because the program had more subscribers.