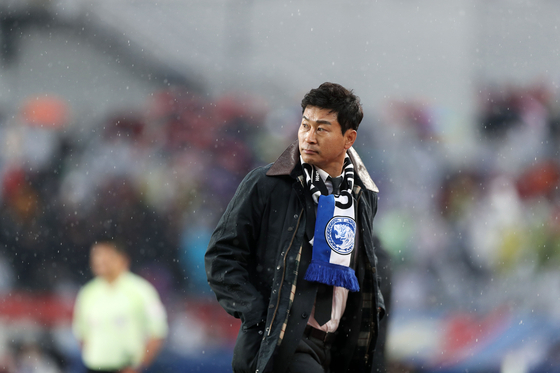 For Ulsan Hyundai FC’s head coach Kim Do-hoon, the 2019 season left him with nothing but regrets.

Before the 2019 season started, Ulsan was considered as strong favorites to stop Jeonbuk Hyundai Motors' dominance, and just as the other clubs expected, it made it all the way to the end. But in the end, Ulsan gave away the 2019 K League 1 title to Jeonbuk by losing 1-4 to the Pohang Steelers. This also allowed Jeonbuk to pick up a dramatic come-from-behind victory.

The loss led both Ulsan and Jeonbuk to tie the ranking points at 79, but as Jeonbuk led in scoring by just a goal, Ulsan had to walk away with a runner-up finish.

The disappointment saw fans focus all their criticism on Kim, with some even going as far as saying that “Ulsan can’t win because of Kim Do-hoon.”

Such criticism hasn’t died down this season. Once the 2019 season ended, Ulsan signed midfielder Lee Chung-yong and goalkeeper Jo Hyeon-woo. This excited the fans as it meant the team had its best-ever squad, but once again, they are doubting that the club will win because Kim is the head coach.

Despite the negative comments Kim has been receiving, Ulsan got off to a strong start of the K League 1’s 2020 season, picking up a big 4-0 win against Sangju Sangmu in its season opener at Ulsan Munsu Football Stadium on Saturday.

It may be too early for the fans to turn their negative outlooks into positive ones with just one win from Kim, but he says that the club has worked harder than ever for this season, which had been postponed by about two months due to the coronavirus outbreak.

Q. You went through many painful incidents last season. How do you feel now?

A. They are something I have to overcome. At the end of last year, I couldn’t bring the result. I think I didn’t go outside and just stayed at home. I cleaned up some stuff and took a lot of time looking back at myself. This year, I’m preparing to show a better team. Since we couldn’t play football due to the coronavirus outbreak, I feel more thankful for the sport now.

Since the number of matches has decreased due to the coronavirus, there had been arguments that the teams with great bench players may be at a disadvantage. What do you think?

I guess it’s obvious. As the number of matches has decreased, it’s disappointing that there is less playing opportunity for great players to be out on the pitch. But this can also be considered as an opportunity to concentrate more with a better squad. We would have to accept the situation and come up with a solution. Along with the league [matches] it’s an opportunity to give it our all in the AFC [Asian Football Confederation] Champions League and the FA Cup.

Jeonbuk Hyundai Motors have set their sights on a fourth consecutive K League 1 regular season title, which would be a first for the history books. How do you feel about that?

Someone will have to stop Jeonbuk’s dominance, and I want Ulsan to play that role. For Ulsan, too, our goal is to win. Rather than stopping Jeonbuk’s dominance, I believe that if Ulsan consistently shows our competitiveness and strong sides, then we’ll naturally reach the top spot.

What do you expect from the matches against the Pohang Steelers this season?

I think they’ll be good matches because they are like a rival team to us. Rather than the technical and skills sides, the mental side affects the players heavily in the derby between the two teams on the eastern coast of Korea. We struggled against Pohang last year. To get over that, we’re going to use every possible strategy. The eastern coast derby this season can be stronger motivation [for the players and for me]. We’ll prepare well for it.

With the new additions, Ulsan seems to have great players this season. How do you feel about your squad?

I’ve experienced the “Real Seongnam” era, and I think our squad is just like that. Whichever team we compare ourselves to, I don’t think we fall behind. Not only the name value of the players, I think their mindsets and attitudes are the best in the K League. I have high expectations.

It seems like choosing your best 11 will be a tough decision but a happy one as a head coach. Is that fair to say?


It is a happy concern. I’m honored to be the head coach of these players. I’m happy that I am the head of this team. My best [11] will be decided by choosing the players who are in the best condition. I don’t have a set best yet. Everything will be determined based on training. I’m going to make changes depending on the team and my strategy. There are players who can show both the story and the result. I’m confident that we can fulfill the fans’ enjoyment.

Do you think any of your players will be selected for the national team?

They really are great players. They are players who can fulfill their roles at any time. When they don’t play in matches, I have a chat with a player. I talk to them with honesty, without any lies. Depending on our opponent, sometimes, we would need a technical player, and at times, we need a player who can fight back. I tell them about this every time so they understand. I’m trying my best not to have any misunderstandings.

Lee Chung-yong finally returned to the K League, and he played well in the opening match. What did you think?

He’s a player where I don’t need to say anything. His moves when he has the ball are really the best. He’s also showing his experience back in Europe. The way he trains also acts as a good example to the other players. The day before the match, I told Chung-yong not to feel pressure and just enjoy. He played really well. He’s the kind of player who can play the easiest and the best football on the pitch. Off the pitch, he’s also perfect.

Ulsan’s young players like Lee Dong-gyeong and Won Du-jae, who are waiting to compete at the Olympics, didn’t start in the opening match. What was the reason behind that decision?

Those two players are both great players. I’m thinking of giving them a lot of playing opportunities from now on. Dong-gyeong is a great player, as a substitute, to be our wildcard when the opponents seem to have lost energy. But he’ll also be getting some playing time in the starting lineup. Du-jae is a player that we must have to have a comfortable playing strategy. While Shin Jin-ho and Yoon Bitgaram are more of offensive players, Du-jae is a player who can play in a more stable situation. That’s his strength.

What expectations do you have for Bjorn Johnsen?

Gleidionor Figueiredo Pinto Júnior, [called Júnior], has been playing well. But since there’re areas that Junior can’t fulfill, we’ve brought Johnsen to fulfill them. He scored goals in all the practice matches so he has the skills. He still needs more time to adjust, but I’m not concerned. Once he can maximize his strength, then he’ll be able to show good sides.

There had been talks and comments about how Ulsan can’t win because of the head coach. What do you think of that?

I just need to do well. The head coach is the person who takes the responsibility for the [team’s] results. Our players played really well last year. I’m sure those comments were said because they have affection toward Ulsan and such comments motivate me to be better. So I’m humbly accepting them. They are saying that so I can work harder. I’m not perfect. But I do have the mindset of wanting to be perfect. I’ll work hard toward the goal of winning, which the fans have also been desperate for. The only way to prove myself is by results.