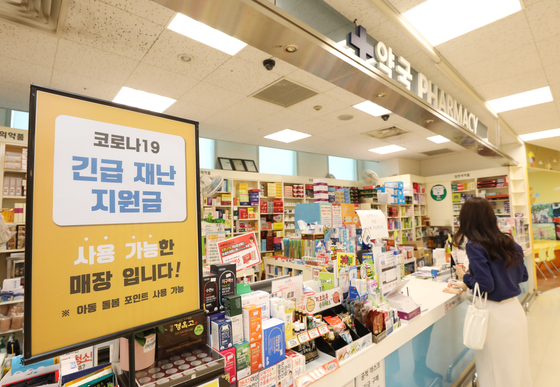 A sign at a drug store in Emart in Seongsu-dong, eastern Seoul, indicates that it accepts the emergency disaster relief funds. [EMART]


Emergency disaster relief funds can be spent at a hair salon located inside Emart, but not for groceries at the very same retailer. Recipients can also use the funds for food deliveries ordered online, but only if they pay directly to the delivery driver instead of via a mobile app.

The payments are intended to help reinvigorate the economy and help people survive the downturn, and the exact amount depends on the number of people in a household: 1 million won ($890) is given to households with four people or more. Applications for the program were accepted starting May 11.

In line with the program's goal, the government prohibited use of the funds at certain locations. Spending at large conglomerate-owned department stores is prohibited.


But some exceptions are allowed.


Starting May 13, 800 stores, or 30 percent of all the leased stores, inside 158 Emart and big-box Traders stores nationwide accept the relief payments. Those shops — ranging from drug stores to hair salons — have been leased to small enterprises.


An Emart branch in Seongsu-dong in eastern Seoul has 11 shops out of 26 leased shops that can accept the relief payments. They include a kids' cafe, an optical store and a car wash. People can also spend the payments at health care facilities like the dentist's and pediatrician's in the Seongsu-dong branch.


In principle, relief funds can be used at conglomerate franchise stores run by individual business operators, including at convenience stores. Corporate-managed stores can also accept the relief funds in the city where its headquarters is based.


For similar reasons, coffee lovers can spend the relief funds at Starbucks, but only if they are Seoul residents, as the coffee house is headquartered in Seoul. Since all Starbucks stores are directly managed, sales from cafes outside the capital city are excluded.


Whether Seoul residents will be able to spend the funds at Starbucks stores outside the city will be determined by card companies, according to Park Han-jo, a spokesperson for Starbucks. The entire Ediya Coffee franchise stores accept the relief funds from regional residents, except for two directly-managed stores in Gwangju and Busan.


“Whether it was right to enable the use of the relief funds at cafes like Starbucks is something to reconsider,” said Chung-Ang University economics Prof. Lee Jung-hee. “Coffee is neither basic sustenance nor a daily necessity. Also, people can purchase coffee at a much cheaper price outside fancy coffee shops.”