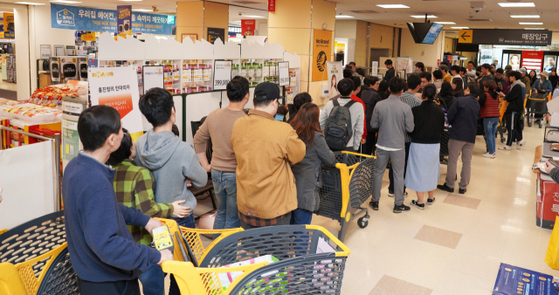 Visitors wait in line to enter an Emart store in Seoul on a promotional day in November. [EMART]


Emart’s on-year operating profit declined more than 30 percent in the first quarter on sales that increased on the performance of big-box store Traders and the affordable No Brand specialty stores.


Emart on Wednesday reported 48.4 billion won ($42.98 million) in operating profit, down 34.8 percent on year, on 5.21 trillion won in sales. The sales were up 13.6 percent compared to last year’s January-March period.

Sales growth was led by Traders, which reported 671.1 billion won in sales, up 21.8 percent on year. Its operating profit went up 22.4 percent during the same period to 17.5 billion won.

Emart’s specialty No Brand chain reported its first operating profit since the business was launched in 2015, 2.5 billion won.

The online store SSG.com continued to suffer an operating loss, 19.7 billion won, down 82.4 percent from the first quarter last year. Its sales, however, grew 73.9 percent to 306.9 billion won.

“The performance is meaningful in that some Emart [discount chain] stores had to be frequently closed in February and March due to the coronavirus,” said Emart in a statement. Emart stores were forced to close on some days when visitors were found to have been confirmed with the coronavirus.

“The first-quarter performance is a direct impact of the coronavirus,” said Kim Jong-min, a spokesperson for Shinsegae Department Store. “The department store at the Gangnam branch, which has the highest sales, either shut down or closed early on seven days over the past two months due to the virus.”

Shinsegae Department Store’s Gangnam branch sales last year was 2 trillion won.
Although the first-quarter performance was worse than expectations, analysts projected an improvement in the second half of the year.

“The sluggish performance is projected to continue throughout the first half of the year, but it is likely that consumer spending will gradually recover,” said Nam Seong-hyeon, an analyst at Hanwha Investment & Securities. The duty-free unit’s poor performance will continue to affect other affiliates like Shinsegae International, which imports foreign brands.

“But the Korea Customs Service’s recent permission to allow duty-free products to be sold at domestic retailers and be sent abroad is expected to help Shinsegae’s performance.”

The gradual recovery of Shinsegae department store sales in May will help Shinsegae’s performance recover after the second quarter, according to analyst Cha Jae-hun from DB Financial Investment.

Sales at Shinsegae department stores from May 1 through May 11 grew 4.3 percent on year on a gradual recovery in consumer spending.