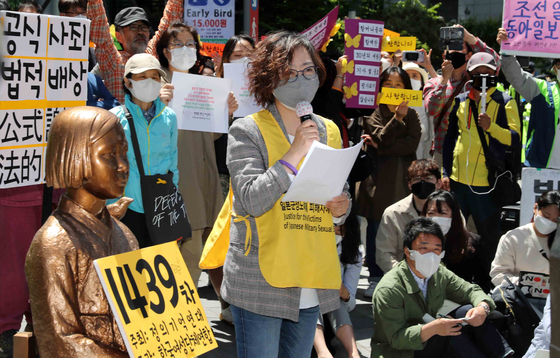 Lee Na-young, head of the Korean Council for Justice and Remembrance for the Issues of Military Sexual Slavery by Japan, speaks at a weekly Wednesday rally calling to resolve the comfort women issue in front of the old Japanese Embassy in central Seoul. [KIM SANG-SEON]

The controversy surrounding Yoon Mee-hyang, a lawmaker-elect and former head of a civic group dedicated to supporting victims of Japan’s wartime sexual slavery, is drawing comparisons to the Cho Kuk scandal which also divided political blocs.

Yoon, who was elected as a proportional lawmaker of the Democratic Party’s satellite Citizen Party in April, has been busily rebutting public scrutiny and attacks against herself and her family after a former victim of the Japanese military’s sexual slavery during World War II questioned her integrity last week.

Yoon has since faced accusations that she may have funded her daughter’s overseas studies through misappropriation of funds from the civic group dedicated to resolving the so-called comfort women issue that she previously headed, the Korean Council for Justice and Remembrance for the Issues of Military Sexual Slavery by Japan.

Yoon wrote on her Facebook account Tuesday that her situation is reminiscent of that of “former Justice Minister Cho Kuk, whose family and friends were scrutinized vigorously for six months.”

Cho, a former aide to President Moon Jae-in who has championed prosecutorial reform, also got caught up in a clash between conservatives and liberals and lasted just one month as justice minister. He was later charged with abuse of power among other allegations, while his wife Chung Kyung-sim also faced heavy scrutiny for the fabrication of their children’s academic records and was last week released after 199 days of detainment after prosecutors decided not to seek an extension of her detention.

Lee Yong-soo, a 91-year-old survivor, in a shocking press conference on May 7 questioned the financial transparency and integrity of the Korean Council and Yoon, a founding member of the group which dates back to 1990. Lee, a longtime activist for the comfort women issue, also accused Yoon of knowing the details of the deal between Korea and Japan signed in 2015 and keeping them from the survivors. Yoon and Lee’s relationship dates back 30 years.

Yoon has shot back at various accusations through media interviews over Tuesday and Wednesday including allegations that the Korean Council misappropriated funds.

Yoon’s daughter went to study abroad in Chicago in 2016 on a full scholarship, according to Yoon. Her daughter went on to study music at the University of California, Los Angeles (UCLA) in 2017, where she began a masters’ program in music the following year.

She said that her daughter’s UCLA education in 2018 was paid for with state compensation her husband received after after being exonerated from espionage charges. Her husband at that time had received 190 million won ($155,000), and Yoon and her family a total of 89 million won, she said, which covered the entirety of her daughter’s UCLA tuition along with her living expenses. Her husband was accused of violating the National Security Act in 1994 and sentenced to four years in prison. He later appealed and was cleared of the charges by the Supreme Court in 2017.

Yoon’s situation is also seen to be dividing those who are pro- and anti-Japan.

Rep. Kim Duk-wan of the Democratic Party (DP) in a radio interview Wednesday called the attacks on Yoon “indiscriminately attacks by the conservative bloc.”

He said, “The conservatives are now uncomfortable with the progressive agenda” and that “there are still pro-Japanese forces scattered throughout society.”

Kim posted on Facebook later in the afternoon Yoon should be reward by the state for her civic efforts and that “the criticism cannot be explained by anything other than pro-Japan sentiments.”

DP Rep. Park Yong-jin however said that the financial records of the Korean Council should be revealed despite criticizing the conservatives’ attack on Yoon.

Rep. Ha Tae-keung of the main opposition United Future Party responded to Rep. Kim’s remarks in a Facebook post Wednesday. “Since when has raising an issue with the transparency in financial records been a matter of being pro-Japan? Does that mean a group fighting against Japan can't have an accounting fraud?”

On Dec. 28, 2015, a controversial deal aimed at resolving the wartime sexual slavery issue was struck between Japan’s current Shinzo Abe administration and the Park Geun-hye government which included an apology from Tokyo and a 1 billion yen ($9.34 billion) fund for the victims. The agreement was to be “final and irreversible” so long as it is faithfully implemented and also acknowledged Japan’s concern about a bronze statue symbolizing comfort women victims near the Japanese Embassy in Seoul.

Some victims and civic groups immediately criticized the agreement for its failure to recognize Japan’s legal responsibility for its war crimes and said they were kept in the dark about the deal. Japan’s calls for the removal of the iconic statue also drew backlash.

The liberal Moon Jae-in administration has called the agreement “flawed” and scrapped the Tokyo-funded Reconciliation and Healing Foundation, but has stopped short of overturning the deal.

The Korean Council in a press conference Monday explained that it had used around 41 percent of donations to support the comfort women survivors and the rest of the money to fund projects related to raising awareness on the comfort women issue including research, education and commemorative programs.

Yoon has also rebutted accusations that she had known about the agreement beforehand, saying that she hadn’t been provided any details by the government ahead of the 2015 deal, including that it will be “final and irreversible” or the controversial language about the comfort women statue.