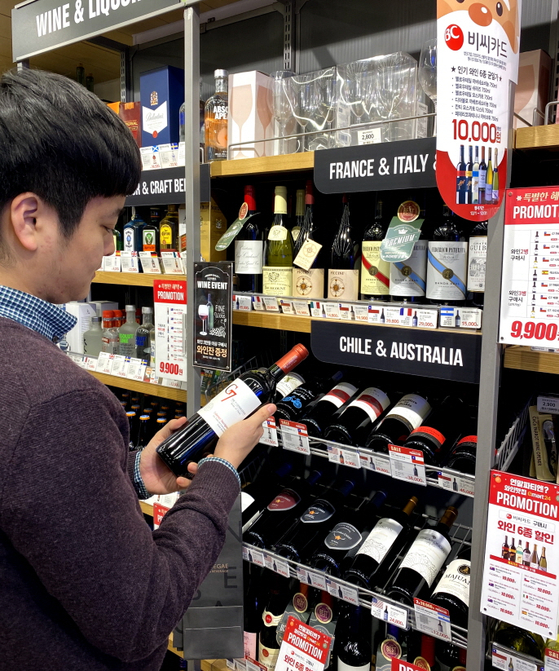 A customer examines a bottle of wine displayed at an Emart24 convenience store. [YONHAP]


Where is all the disaster relief money going exactly?

It turns out customers may have used these funds to splurge at convenience stores.

Wine, imported meats and Bluetooth headphones — items normally considered expensive to buy in convenience stores — were flying off the shelves in April, according to data released by three major convenience store chains Tuesday.

Average customer transaction amounts on the two mobile payment methods at CU stores was 12,000 won ($9.80) in April, 2.4 times higher than for customers using other payment methods, according to BGF retail.

It was the same at GS25 stores. The amount purchased by customers using the two payment methods was two times higher than that of other customers in April.

Wine, beer, dried meat and anju, or snacks for alcohol drinkers, were some of the top categories for CU stores. Sales of wine, often the most expensive item sold in convenience stores, jumped 777.1 percent in April on month. The sale of cold meats, dried anju and refrigerated anju were up sixfold in April.

Kona Card and Zero Pay are mobile payment systems the central government and regional governments use to distribute disaster relief funds. In April, the Seoul city government distributed emergency living expense support, and the Gyeonggi government gave out 100,000 won to every resident in the province via local currency that could be accessed through the two mobile payment methods.

Sales of food ingredients and ready-to-eat items by those using these cards jumped as more people opted to cook at home than dine out to avoid contact. Tofu, flour, condiment, noodle, gimbap and packaged salad sales were up sevenfold. 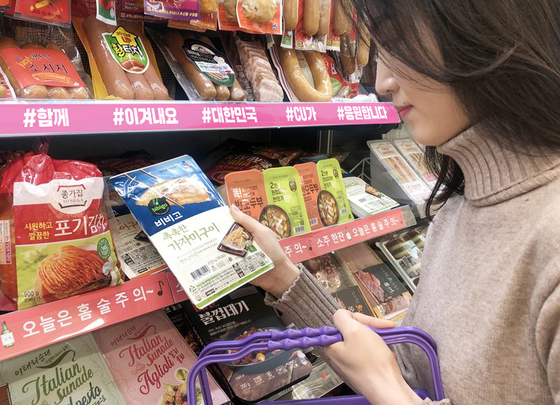 A customer is looking at a ready-to-eat meal at a CU convenience store. [BGF RETAIL]


After the regional government rolled out its disaster relief, the number of payments made by Zero Pay and Kona Card increased rapidly. The number of payments increased sixfold in April compared to the previous month, then eightfold in May. While the data does not include purchases made by disaster relief grants rolled out by the central government since Monday, BGF Retail expects similar consumption patterns to continue once these grants are claimed.


Wine was the most popular item at 7-Eleven. According to the retail chain’s sales data, the sales of wine topped the charts among Zero Pay users, increasing by 621 percent on month. Food and ready-to-eat meals were some of the other popular items.

Apart from food, expensive items which are normally in low demand at convenience stores also sold well. Purchases by Zero Pay users of electric devices such as headphones and phone chargers were up 682.4 percent in April on month, followed by stationery items, up 651.7 percent. Cosmetics, socks, clothes and toiletries were also among popular items for Zero Pay users.

According to GS25's consumer analysis report, the most popular items bought by Zero Pay and Kona Card users were imported meat, with sales increasing by 710.7 percent on month. Domestic pork and processed meats made it to the top five sold list, sales of which increased by 394.9 percent and 347.7 percent, respectively. Processed meats, like smoked duck bacon packaged in single servings, were among the popular items.

Sales of small home appliances, cereals and wine increased more than twofold compared to March. Unlike other convenience stores, sales of food ingredients such as kimchi, salad and green vegetables were below average.


In line with the trend, convenience store operators are coming up with creative marketing plans to seek their cut of disaster relief funds.

CU rolled out a special 5 percent discount to anyone who purchases goods in their stores with local currency via the two mobile payment methods. GS25 designated 122 items and will give out freebies and discounts to people who purchase them with government relief grant money.

“We are planning to come up with an additional promotion event for customers using Covid-19 relief money,” said Yoon Seok-woo, a manager of the big data department at BGF Retail.

“We want to create a virtuous cycle of economy, where we contribute to the local economy by stabilizing the livelihoods of ordinary consumers.”

Wine and convenience stores pair well together it seems