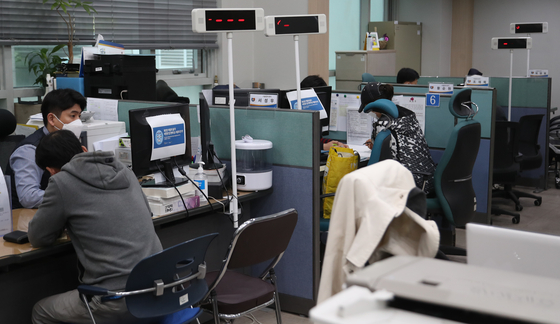 
Small businesses can apply for special government-guaranteed loans from Monday in a second program organized to get credit into the hands of those facing Covid-19-related financial hardship, especially restaurants and convenience stores. This program, which is being handled by seven commercial banks, differs significantly from the first in terms of the businesses being targeted and the nature of the official support for the program.

According to the Financial Services Commission (FSC), the program will get 10 trillion won ($8 billion) of credit into the hands of 1 million business owners. Conditions will be relatively easy. Interest rates on the loans will run between 3 and 4 percent and terms will be up to five years.

Some business will be prohibited from applying. Those borrowing in the first special loan program in April are not qualified to lodge an application for the second. Businesses owing money to the national tax agency will also be blocked from participation in this program.

Applications will be processed quickly, according to the FSC, as the loans are to be 95 percent backed by Korea Credit Guarantee Fund, a government institution. Even those with short or imperfect credit histories are encouraged to apply.

“The goal is to minimize the capital vacuum by managing the second financial aid program swiftly,” said Sohn Byung-doo, FSC vice chairman, last week. “Any small business owners even with low credit scores will be approved if they have the capability in paying back the loan.”

In the first program in April, roughly 360,000 loans were approved, and a total of 16.4 trillion won was disbursed. While these credits were not guaranteed by the state, government-owned Industrial Bank of Korea took up half of the total and commercial banks covered a third.

A rate of 1.5 percent was offered and the cap per business was set at 30 million won. The total amount on offer was gone within six weeks, according to the FSC.

The second round was proposed during the emergency economic council meeting headed by President Moon Jae-in as small businesses continue to suffer the effects of the coronavirus outbreak and jobs are being shed rapidly, especially in the restaurant and lodging sectors.

According to a study by the Ministry of SMEs and Startups of 520 small businesses last week, small businesses in Seoul said their earnings have shrunk 64 percent compared to the earnings prior to the coronavirus outbreak.

The government has been conducting the study every week since Feb. 3. While the earnings have started to improve in late April, they started to decline again after a cluster was found in Itaewon.

In a study released by the Korea Federation of SMEs on Sunday, 40 percent of businesses said that increasing or guaranteeing loans was the most effective measure for supporting small businesses. That was followed by lowering rent (23.2 percent), expanding the credit and debit card income tax benefit (14.4 percent) and government subsidies to keep employees on the payroll (12.4 percent).

The business owners said the government loan programs and other financial support measures are not enough. They most favored lowering taxes (61.4 percent).

“As the small business owners are requesting systematic policies that will ease their financial problems while stimulating spending, the government needs to provide appropriate measures accordingly to the changing situation in preparation of the coronavirus situation becoming extensive,” said Choo Moon-gap, head of the economic policies department at the Korea Federation of SMEs.