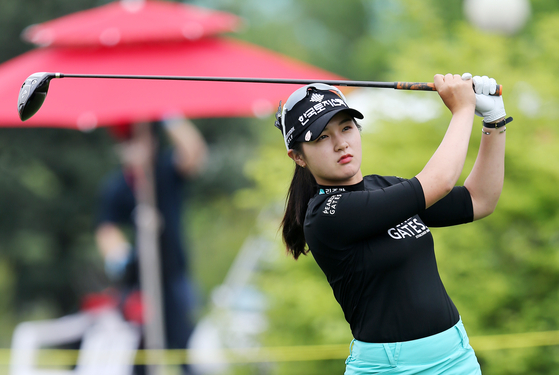 Park Hyun-kyung watches her shot during the final round of the 42nd KLPGA Championship at Lakewood Country Club in Yangju, Gyeonggi, on Sunday. [YONHAP]

In the first Korean tournament since the Covid-19 outbreak, on a course without fans, Park Hyun-kyung picked up her first-ever KLPGA Tour victory at the 42nd KLPGA Championship at Lakewood Country Club in Yangju, Gyeonggi, on Sunday.

Park, who started the final round three shots behind overnight leader Lim Hee-jeong, didn’t seem likely to win the tournament as Lim cruised through by extending her lead to five shots with birdies on the par-5 first and the par-4 third, but Lim bogeyed on the par-5 seventh. While Lim, who picked up three wins as a rookie last season, started to struggle, Park moved up to the leaderboard.

“Since I’ve finally picked up a win that I’ve been dreaming of, I think it’s more meaningful to me than any others,” Park said after the win.

With a win, Park picked up her first win on the KLPGA Tour on Sunday. Park made her KLPGA Tour debut in the 2019 season, but she didn’t stand out as much since the Tour had such a strong class of 2019 rookies, like Lim or Cho A-yean, who both picked up multi-wins. Due to this, Park said she was stressed mentally. Looking at her statistics last season, Park had an impressive rookie season as she finished third in rookie-of-the-year points and only missed four cuts while competing in a total of 27 tournaments. 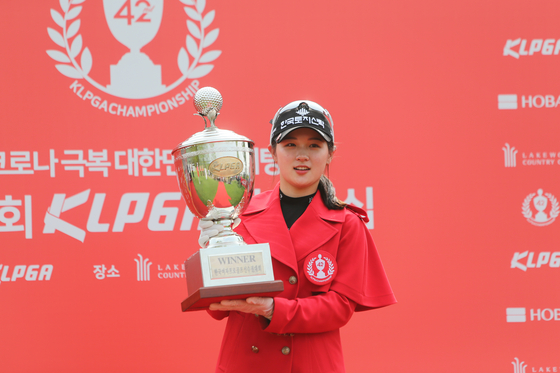 Park Hyun-kyung poses for a photo with the trophy after wining the 42nd KLPGA Championship at Lakewood Country Club in Yangju, Gyeonggi. [YONHAP]


Her first victory makes it more meaningful as it was a major tournament. Although Park’s goal this season was to win, now that she’s accomplished it already, she said that she will be working even harder to achieve another goals of hers: the scoring average title.

The 42nd KLPGA Tour Championship had the highest winning purse in history, at 3 billion won ($2.4 million). By being named the champion, Park took home the prize money of 220 million won.

This was the first KLPGA Tour event of the 2019-20 season that’s being held in Korea. Due to the coronavirus pandemic, the KLPGA Tour also had to pause after the opener in Vietnam in December last year.

Despite the competitive field, the LPGA Tour players didn't meet expectations. World No. 3 Park Sung-hyun, who was competing in her very first tournament of the year, missed the cut after the second day by shooting a two-day total of six over par. She was tied for 118th after the second round.

World No. 6 Kim Sei-young finished the tournament at two under par, 286, good enough to be tied for 46th.

World No. 10 Lee Jeong-eun, who is also the 2019 LPGA Tour’s rookie of the year, had an impressive finish as she made a huge jump in the standing on the final day. With an impressive final day score of eight under par, 64, Lee finished the tournament at nine under par, 279, good enough to finish tied for 15th.

Kim Hyo-joo had the best finish among the LPGA Tour players as she finished tied for fourth with a total score of 14 under par, 274. Just like Lee, Kim also had an impressive final round, where she shot a bogey-free round of eight under par, 64.

Just like baseball and football, the KLPGA, too, played through the weekend without any fans at the course. But this didn’t seem to affect the players much as golf is played in silence. Perhaps, this allowed the players to finish their rounds earlier compared to the past.

After a week off, the KLPGA Tour will continue its season with The 8th E1 Charity Open at the South Springs Country Club in Icheon, Gyeonggi, starting from May 29 to 31.

While the KLPGA has resumed the season, the KPGA Tour, the men’s tour in Korea, doesn’t seem like it will start anytime soon as it announced on Friday that it will cancel the 63rd Kolon Korea Open, which was set to take place at Woo Jeong Hills Country Club in Cheonan from June 25 to 28. This is the first time in history that the KPGA Tour has canceled the Korea Open.