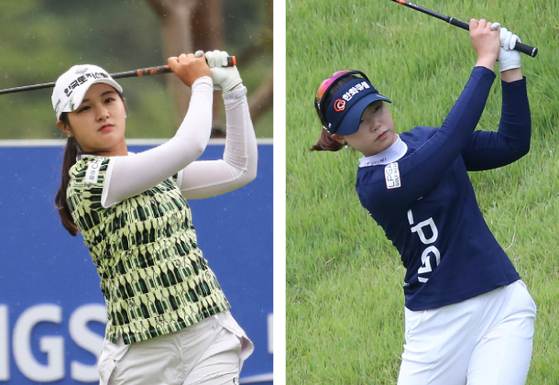 Park Hyun-kyung, left, and Lim Hee-jeong watch their shots during the second round of the IS Dongseo Busan Open at Stone Gate Country Club in Gijang, Busan on Sunday. [YONHAP, KLPGA]


GIJANG, Busan — On another rainy day in a tournament plagued by bad weather, Lim Hee-jeong and Park Hyun-kyung tied for the lead after the second round of the IS Dongseo Busan Open at Stone Gate Country Club in Gijang, Busan, on Sunday.

Having finished her round early, it seemed as if Lim was going into the final round with a sole lead. However, it was Park Hyun-kyung, winner of the 42nd KLPGA Championship in May this year, who climbed her way up to the top. Park, who shot six under par, 66, on the first day, started to drop her score with three straight birdies — from the par-4 fourth to par-4 sixth. By adding another birdie on the par-4 ninth and the par-3 13th, Park quickly put herself one shot behind Lim.

“Even before I teed up, it started raining,” Park said after the round. “But I had good memories playing in the rain, so I was able to play a little more comfortably.”

As both Park and Lim made their debuts on the KLPGA Tour together last year, the two are friends, but they are expected to go head-to-head on the final day. Rather than feeling nervous, Park said she is excited to compete against Lim as they've never been tied for the lead.

Kim Hyo-joo made quite a comeback on the second round by shooting six under par, 66, but misunderstanding the rules during her first round on Saturday got her a two-shot penalty, which pushed her Saturday score from one over par to three over par. Due to this, Kim is now tied for 33rd at three under par.

LPGA Tour 2019 Rookie of the Year Lee Jeong-eun had a great first round by making an albatross on the par-5 fifth to be tied for fifth. However, a struggle in the second round on Sunday, where she shot five over par, 77, led her to miss the cut.

The 54-hole tournament was expected to end on Sunday, but is now expected to be completed on Monday instead. As the first round of the IS Dongseo Busan Open was canceled due to heavy rain on Friday, the event will now play on Monday to ensure 54 holes are played.

This is unusual for a KLPGA tournament and not actually necessary — in the KLPGA, a tournament only needs 36 complete holes to count.

According to the KLPGA Tour’s tournament official, they're hoping to play 54 holes, but the final round could still get rained off with heavy downpours forecast for Monday.

By extending the expected schedule by a day, this is only the third time that a KLPGA Tour event has ended on a Monday — assuming it goes ahead — and the first time ever the tournament has been extended to ensure three rounds. Monday’s round will only be played between the top 60 players, or those tied for 60th on the leaderboard.

The final round of the tournament will be at Stone Gate Country Club in Gijang on Monday.

While the KLPGA Tour is yet to finish for the weekend, the KPGA Tour did manage to complete play. Rookie Kim Joo-hyung picked up his first win on the KPGA Tour at the KPGA Gunsan CC Open at Gunsan Country Club.

By shooting two under par, 69, on the final day, Kim finished the tournament two shots ahead of the field. A victory allowed Kim to become the youngest golfer on the KPGA Tour to pick up a win, at 18 years and 21 days old.