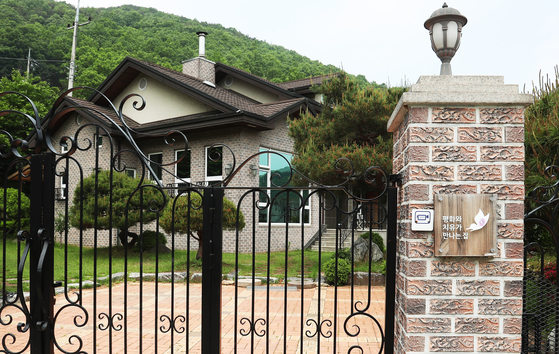 The gates are shut Sunday at a house in Sangjung-ri, Geumgwang-myeon, in the city of Anseong in Gyeonggi, that was supposed to be used as a facility for "comfort women" victims. The house was purchased by a civic group in 2013 reportedly at much higher price than the market value . [YONHAP]

The Korean Council for Justice and Remembrance for the Issues of Military Sexual Slavery by Japan has been under fire for recently selling this facility, which was supposed to serve as a center for victims of the Japanese military’s sexual slavery during World War II. The facility, the House of Peace and Healing, was sold for 420 million won on April 24 at a reported loss.

The Korean Council bought the two-story house in a residential area in Sangjung-ri, Geumgwang-myeon, in the city of Anseong in September 2013 for 750 million won — much more than the price of comparable properties in the area. Hyundai Heavy Industries at the time donated 1 billion won designated to building a healing center for "comfort women" victims.

Yoon Mee-hyang, a lawmaker-elect and former head of the civic group, has faced various accusations of mishandling of the civic group’s donations. She put her father in charge of maintaining this facility, which had reportedly been used for church functions, workshops and retreats rather than for its original purpose.

Lee Yong-soo, a 91-year-old comfort woman survivor and longtime rights activist, questioned Yoon’s integrity in a press conference earlier this month, which has led to a string of accusations against the Korean Council and Yoon on financial transparency. Yoon was elected as a proportional representative of the Citizen Party last month and had rebutted the various accusations.

The Korean Council on Saturday said, “The building was purchased at market price at that time.”

The Ministry of Land, Infrastructure and Transport’s records of transactions made in that time period show that a one-story brick house on similar-sized property that, at 843 square meters, in Sangjung-ri in April 2014 was sold for 200 million won. This house was built in 2011 and was just 1 kilometer (0.6 miles) away from the property purchased by Korean Council.

A residence just 10 kilometers away in Samheung-ri in Geumgwang-myeon, a two-story reinforced concrete house that was 1,124 square meters and built in 2009, was sold in July 2012 for 80 million won.

Ansung Sinmoon, a local newspaper, reported the opening ceremony of the House of Peace and Healing in November 2013 that a CEO surnamed Kim, also an operating director of the paper, built the house. The CEO of the paper at the time, Lee Kyu-min, a lawmaker-elect of the ruling Democratic Party, reportedly linked Kim with the Korean Council which had been looking to purchase a house.

Kim and Lee may have been acquainted through the newspaper. The only newspapers that covered the opening ceremony were Ansung Sinmoon and Urisuwon, at that time headed by Yoon’s husband. The Urisuwon paper article, written by Yoon’s husband, was virtually a copy of the Ansung article. Lee likewise has been involved in the movement to establish peace monuments, statues dedicated to the comfort women victims, and Yoon also sent a video message in support of Lee during his election campaign in January.

Lee told the JoongAng Ilbo over phone on Sunday that Yoon said that the house “will be used for good purposes, so I looked for three locations” and that Kim’s property “was a house that would have been appealing to anyone.”

Responding to allegations that it was sold at a higher price than the market value, Lee said that Kim “called for that price himself, and it’s up to the seller,” adding that the house was built with “special, high-quality materials.”

Kim told the JoongAng Ilbo Saturday, “That was a house that I built to live in myself, and was made out of the finest quality bricks in the country. Why would you compare it to other houses in the area — it’s not the same.”

He added that he even considered calling for up to 900 million won and said, “It was supposed to sell at a higher price, but Lee said that it was going to be used for a good purpose, so I sold it.”

In an interview with Anseong News, another local newspaper, in April 2012, Kim said that the construction of steel houses on average cost between 3.5 million won to 4 million won per pyeong (36 square feet) based on Korea Iron and Steel Association data even factoring in differences in material. Based on such calculations, the construction of the house bought by the Korean Council, equivalent to some 59 pyeong, would have been around 236 million won.

The Korean Council in a statement issued an apology Saturday for using the House of Healing for other purposes than for the comfort women victims to rest and socialize with each other and younger generations to overcome their loneliness and educate people on the wartime sexual slavery issue.

The council said that it had planned on selling the property since 2016 because it was not serving its purpose, and that finally happened on April 23. It also said that Yoon’s father was asked to manage the building based on his prior experience managing a church property.