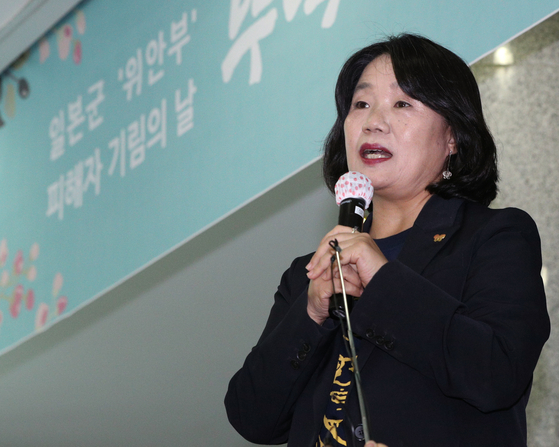 Rep. Yoon Mee-hyang of the Democratic Party speaks at the opening event at an exhibition for comfort women victims at the National Assembly on Monday. [YONHAP]

Before being elected as a lawmaker for the ruling party, Rep. Yoon Mee-hyang was the head of The Korean Council for Justice and Remembrance for the Issues of Military Sexual Slavery by Japan. She came under intense scrutiny in May, following public accusations by Lee Yong-soo, a comfort woman survivor and longtime activist for the victims, who alleged that Yoon had exploited her and other survivors for decades.

According to the prosecution, Yoon arrived at the Seoul Western District Prosecutors’ Office around 1:30 p.m. She was questioned as a suspect, although she has not yet been charged with a crime. Publicly, Yoon has consistently denied the accusations.

Over the past three months, the prosecutors have investigated the civic group’s officials, and have conducted raids at the Korean Council office and shelters for comfort women in Mapo, Seoul, and Anseong, Gyeonggi.

Prosecutors have also questioned surviving family members of the former comfort women and outside auditors of the civic group as witnesses.

Yoon was accused of collecting donations using her personal bank accounts, and the civic group is suspected of having committed accounting fraud under her leadership. The prosecution said Yoon is suspected of embezzlement, breach of trust and violating laws governing public donations.

Despite the controversy, Yoon took her seat as a proportional representative of the Democratic Party (DP) and started her four-year term in May.

Incumbent lawmakers have immunity from arrest without the consent of the National Assembly.

Since 1996, the National Assembly has voted to allow a sitting lawmaker to be arrested only five times.