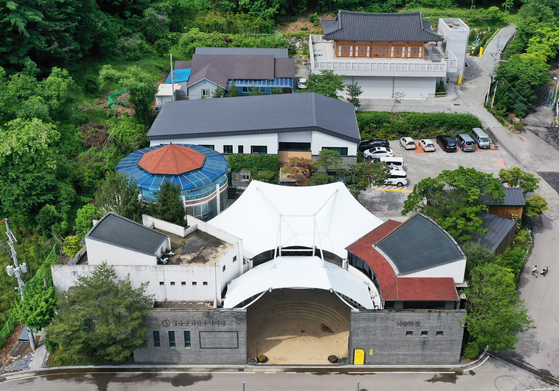 The House of Sharing in Gwangju, Gyeonggi, is pictured Tuesday after facing allegations of misusing donations for ’comfort women“ victims by seven staff members. [YONHAP]

A group of seven staffers of the House of Sharing on Tuesday accused the social welfare organization dedicated to supporting victims of the Japanese military’s wartime sexual slavery of mishandling donations and not properly caring for the survivors.

Kim Dae-won, a manager at the House of Sharing, and six other staff issued a statement that said, “The House of Sharing flaunts that it is a shelter for the comfort women victims and a safe and professional elderly care facility, but in fact is a free nursing home run by donations and does not provide treatment or welfare.”

Since 1992, the House of Sharing has provided shelter for the elderly sexual slavery survivors, euphemistically known as "comfort women," and its current complex in Gyeonggi includes a residential area for the victims and a Museum of Sexual Slavery by Japanese Military.

The seven whistleblowers said that two people hired by the organization have been monopolizing the managing of the House of Sharing for the past 20 years and that they have made sure that all expenses for the comfort women — including hospital fees and purchase of items — come from the victims’ personal pocketbooks.

They said that the group collected some 6 billion won ($5 million) in donations and has assets and real estate worth 7 billion won. They added, “If this problem is ignored, donations by the public for the comfort women victims will be used for the Jogye Order of Korean Buddhism’s elderly care projects.”

The 11-member board of the House of Sharing includes eight Buddhist monks and three non-clergy.

In late March, Kim told the press that donations to the House of Sharing are being used for building construction and other uses.

Likewise, the Korean Council for Justice and Remembrance for the Issues of Military Sexual Slavery by Japan, the other major civic group dedicated to comfort women victims, also has recently been under fire amid various allegations about its finances. In a shocking press conference on May 7, comfort woman Lee Yong-soo questioned how the group and its former head used donations, saying little was spent on the actual victims.

Separately, allegations dating back 16 years have recently surfaced. A group of 13 comfort women accused the two civic groups of bringing in six sexual slavery survivors from China by paying them a large sum of money and getting them to take part in weekly rallies.

Shim Mi-ja and 12 other comfort women victims filed an injunction against the Korean Council for the Women Drafted for Military Sexual Slavery and the House of Sharing with the Seoul Western District Court in 2004 to prohibit these groups from collecting donations and holding rallies.

The JoongAng Ilbo confirmed Tuesday that the documents alleged that six comfort women victims were brought from China by “paying them a large sum of money” so that they can partake in the weekly Wednesday rallies organized by the Korean Council for “panhandling purposes.”

Shim was the first person to be recognized by the Supreme Court of Japan as a comfort women victim. She died in 2008.

The injunction application said that there were some 10 comfort women victims taking part in the weekly Wednesday rallies organized by the Korean Council and that “some women with questionable identities from China have been recruited to try to maintain the Wednesday rallies.”

The Korean Council for the Women Drafted for Military Sexual Slavery, first established in 1990, has been a leading advocate of comfort women and organized demonstrations every Wednesday since 1992 to demand an apology and compensation from Japan. The council was renamed in 2018.

Kim Kang-won, an attorney representing the council at the time, told the JoongAng Ilbo Tuesday his memory was vague because it was “so long ago” and said one survivor “may be a victim from a far away country who returned to Korea.” But the exact victim he referred to has not been confirmed.

The injunction application by the 13 women was drafted on March 13, 2004, and requested that the collection of donations and the making of profit off of the victims’ painful past experiences by the groups be prohibited. It was dismissed by the court on May 25, 2005. At the time, the court determined that the funds generated from donations and producing and selling videos and booklets and the holding of the Wednesday rallies were for the purpose of supporting the livelihood of the comfort women victims, education, revealing the truth, spreading public awareness and protecting diplomatic rights and interests.

The court in its decision also found that aside from the three surviving applicants, the other 125 wartime sexual slavery survivors who have suffered from painful pasts “have been able to regain their dignity and rights” through the activities of the groups.

But the victims at that time also accused Shin Hye-soo, head of the Korean Council at the time, and Song Hyun-seob, head of the House of Sharing, of using their painful past experiences in videos and pamphlets without their permission to collect donations. They claimed that they were “not sure where the donations went” and alleged that the civic group leaders were aiming for “wealth and honor” — and were the ones profiting instead. They also said that a considerable number of victims were not able to properly receive compensation through the civilian-funded Asian Women's Fund established in 1995 by Japan because of opposition from the civic group in 1998.

Shim at that time did receive compensation from the Asian Women's Fund because she believed that any apology and reparation she would receive from the Japanese government in her lifetime would be limited. The victims in their injunction application also noted that the rallies and the civic groups' activities would not help diplomatic relations between Korea and Japan.

The allegations raised in 2004 echo that of survivor Lee Yong-soo’s May 7 press conference, who likewise questioned the Korean Council and its former head about how donations were used.

The Seoul Western District Prosecutors' Office launched a probe into the allegations against Yoon Mee-hyang, a lawmaker-elect and former head of the Korean Council for Justice and Remembrance for the Issues of Military Sexual Slavery by Japan, on Monday after a civic group filed a complaint on May 11 on accusations of accounting fraud.

Yoon said in a radio interview Monday that she has “not considered” stepping down. Yoon was elected as a proportional representative of the Citizen Party, a satellite of the Democratic Party, last month.

Yoon said she “deeply apologizes” for the situation but that she has no intention of stepping down as a lawmaker-elect.

Yoon has been under fire for the questionable purchase of a house in Anseong, Gyeonggi, to be used as a center for comfort women victims at a price much higher than market value in 2013.

The two-story house in Sangjung-ri, Geumgwang-myeon in Anseong was purchased by the Korean Council in 2013 for 750 million won, much more than the price of comparable properties in the area. The Korean Council eventually sold the property for 420 million won on April 24. Yoon’s father had also been put in charge of managing the House of Peace and Healing, which was revealed to have been used for church functions, workshops and retreats rather than for the original purpose, to serve the comfort women.

Yoon told CBS Radio that she seems to have “not properly allocated the 10 billion won” donated by Hyundai Heavy Industries at the time to build a facility for comfort women survivors. She claimed that the council hadn’t been able to purchase property in Mapo District in western Seoul for that amount and eventually bought the house in Anseong, Gyeonggi, which allegedly was more expensive than similar properties in the area because of the construction fees and cost of materials in building the house.

Yoon has also been questioned over where she got the money to purchase an apartment in Suwon, Gyeonggi, at auction in 2012. She paid around 200 million won in cash. Yoon claimed that she had sold her previous apartment to make the purchase; however, an opposition lawmaker pointed out she sold her apartment in January 2013.