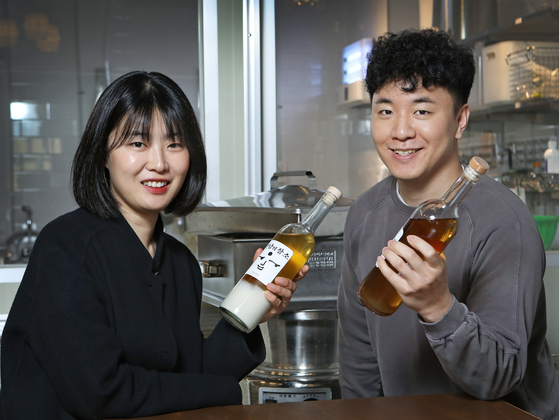 The two entrepreneurs behind Guruma Brewery, Yang Yoo-mi, left, and Lee Du-jae, show off their drink Meeting Point that they made together. [PARK SANG-MOON]

Guruma Brewery aims to make it all, from rice drinks to juice

If you’ve ever wondered what a cloud tastes like, a good place to start might be the Guruma Brewery in western Seoul’s Mapo District.

At Guruma, whose name means clouds in Korean, alcoholic drinks are made out of rice along with other ingredients such as peaches and ginger. The two brains behind the brand that was born last year are Yang Yoo-mi and Lee Du-jae, who used to make the alcoholic beverage mead for 3 Bears Meadery and left the company beginning in 2018.

Yang and Lee believe that life takes interesting turns to unknown territories just like clouds do as they float. Also, their use of traditional methods for fermenting rice means that no result is like the other, which the two say is similar to how clouds often change forms. The many correlations between their rice drink product and clouds made the name a pretty obvious choice for the brand. The word being easy to pronounce in Korean, English and Japanese was also attractive for the two entrepreneurs who are thinking of taking their products to the global market.

The two friends since elementary school decided that they wanted to make something that only they could make under the Guruma Brewery brand. To produce wholesome drinking experiences for their customers, they make everything from scratch and in small batches for now and are also behind the branding and logo design. One more person has recently joined to make drinks.

Each time they release bottles, they sell out quickly and both individual and restaurant customers have to wait until new batches come out. The Guruma brand started to go viral when those who were able to get their hands on a bottle proudly shared their experiences on social media.
Currently only around 10 stores and restaurants have bottles of Guruma Brewery’s  Love Letter and Meeting Point in stock.

The brewery’s first-ever drink was Love Letter, which is made with rice as well as peaches. Another line of drinks that they have released five different batches of is called Meeting Point, which is made with ginger and pepper. The latter, whose color is a murky white, has about 12 percent alcohol, which is much higher than other makgeolli, fermented alcoholic drinks made with rice. They insist on using traditional methods despite fickle results due to the richer flavor profile it produces.

“On top of the finest taste of fermented rice, we try to make the characteristics of the other ingredients  added to the drink stand out more to keep it from being considered makgeolli, but instead something else tasty.” 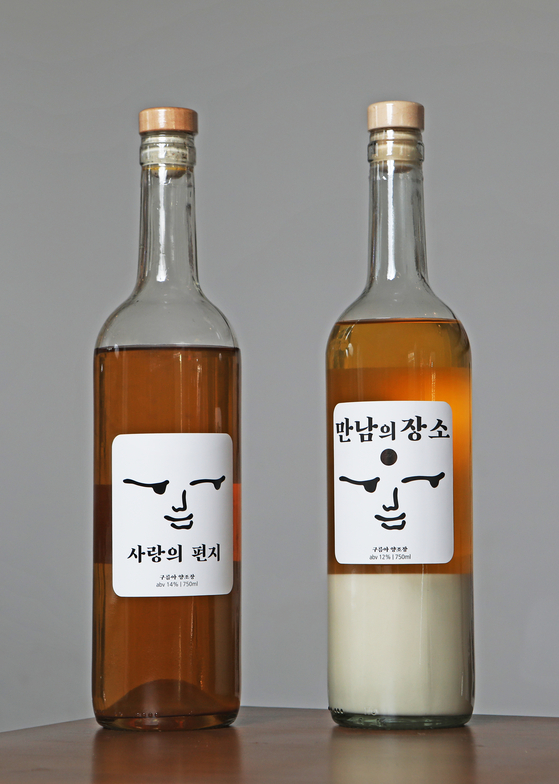 Why did you continue making drinks even after leaving the meadery?


Yang: I hope people want to have this drink we make ready in their refrigerator at all times. This can be something that people drink after work or serve at dinners with family or friends. We hope they talk about the different batches they have had and how different they were.

What is the essence of your drinks?


Yang: Time, manpower and nature are three things that are necessary for making drinks. Since the three things cannot be controlled by my will, we just become very humble.

How many batches have you released for far?


Lee: Seven batches.
Yang: We went through a research and development process before we released our first batch of bottles. We have done about 100 different combinations. We first try making about 20 liters of a drink, and if it seems good, we try making 200 liters. I think we started to make what we wanted to make from batch No. 3.

Why do you make smaller batches each time?


Lee: I feel ecstatic when something tasty is created from my fingertips. We are doing the maximum quantity we can do at the moment. If we want to produce more, we have to consider making drinks in a different, [more automated] way. We are studying how to do that while keeping the quality we want, but for now we make everything by hand. After we got the flavors we didn’t expect to have for batch No. 2, we started to become more meticulous about all the details, and we have been getting a rather constant flavor profile from batch No. 3 until now.

What collaborations have you done thus far?


Yang: Gelateria Zenzero [in southern Seoul] has made a gelato with our drink. We almost cried when we first got to taste it. The taste was so delicate, and it has all the elements we also wanted to include in our drink. Sometimes our drink is so tough, we were so thankful that they used flavors we wanted to refine in their product and made a cloud-like texture, just like the name.
Lee: Our drink contains characteristics that we want to show off to look cool, and their version of the gelato showed off a more tender side, which we might have neglected.

What other collaborations are you planning to do?


Yang: We are in the process of collaborating with Seoul Gypsy, a craft beer brand. We’re planning to make something using rice. We will both sell the final  product by as early as June or July.

What ingredients have you tried using when testing out batches for the future?


Yang: We sometimes try doing it with visitors. We ask them to bring an ingredient of their choice or take them to a nearby market to pick up some ingredients. We have used strawberries, mango, raspberries, radishes, pine nuts, tangerines and more.
Lee: The better quality ingredient you bring, the better the taste of your alcohol. You could even use a gummy bear. 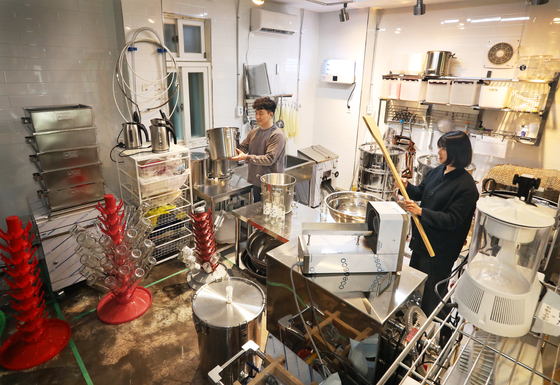 The brewers of Guruma Brewery working in their kitchen in Mapo District.

Where did you get the inspiration for the label design?


Yang: We wanted to come up with a design that customers could see themselves in. We were inspired by the face of a pensive bodhisattva. It seems to look sad when I’m sad and looks satisfied when I’m satisfied. It is possible to have different interpretations of the expression, so we wanted to take that and put it onto our label.

Why do you add “Embrace the Moment. Drink Responsibly” on the back of the bottle?


Yang: I think the essence of alcohol is being a medium. It connects people to others, and it connects alcohol makers to drinkers. More importantly, it connects the past to present, so we put “Embrace the Moment.” Don’t think about the worries of the past or be nervous about an uncertain future. Just focus on the moment.

Do you want to try making anything other than alcoholic beverages?


Yang: We want to make some different types of food. We want to do juice, or something that’s more like puree or sauce.