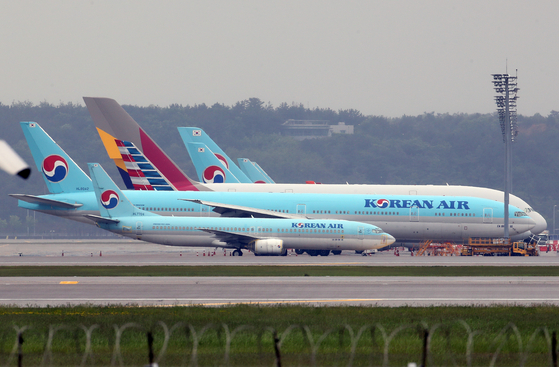 Korean Air planes are still grounded at Incheon International Airport as overseas travel is still limited due to the coronavirus pandemic. Profits for airlines declined sharply in the first quarter of this year. [YONHAP]

Listed Korean companies barely grew in the first quarter, while profits plunged, according to a report from the Korea Exchange and the Korea Listed Companies Association.

The study of 592 companies that report in December, excluding financial firms, found that revenue grew only 0.9 percent to 495.3 trillion won ($404 billion) in the first quarter. Operating profit fell 31.2 percent to 19.5 trillion won, and net profit declined 47.8 percent to 11.3 trillion won.

When Samsung Electronics, the country's largest company by market capitalization, is removed from the equation, the picture looks even more gloomy.

In the first quarter, Samsung Electronics reported a 3.4 percent increase in its operating profit to 6.45 trillion won, while net profit fell 3.2 percent year-on-year to 4.88 trillion won.

For service companies, net profit was down 75.7 percent, while the net profit at retailers declined 39 percent. Net profit for electric and electronics companies declined 2.9 percent.

In the case of the Kosdaq, IT software companies fared relatively well, with operating profit increasing 16.11 percent, while revenue for IT hardware companies declined 12.8 percent.

The larger concern is the second quarter, as the hardship is seen continuing due to the protracted recovery from the virus.

“The first-quarter performances, which were expected to be the beginning of an economic recovery, have continued a profit decline due to the Covid-19 shock,” said Kim Min-gyu, an analyst at KB Securities. “The current consensus is that the current path of profit decline will continue throughout the second quarter.“