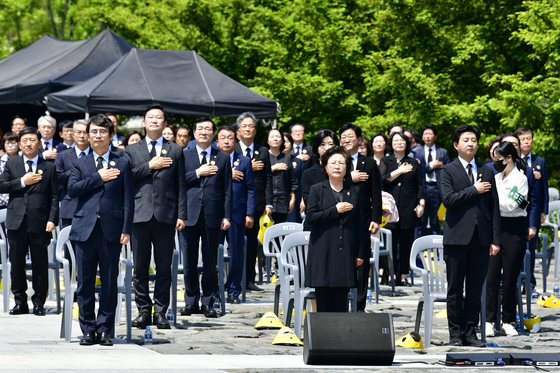 A ceremony commemorating the 11th anniversary of the death of former President Roh Moo-hyun is held on Saturday at Bongha Village in Gimhae, South Gyeongsang, attended by some 100 people including his widow Kwon Yang-sook and political leaders of ruling and opposition parties. [YONHAP]


A ceremony commemorating the 11th anniversary of the death of former President Roh Moo-hyun was held on Saturday at Bongha Village in Gimhae, South Gyeongsang, bringing together key political figures of ruling and opposition parties but at a smaller scale than previous years because of the coronavirus pandemic.

While the memorial service usually is attended by thousands of people in commemoration of Roh, this year, taking into consideration Covid-19 precautions, around 100 people attended and were seated at least 1.5 meters apart. The ceremony was streamed live online for mourners to virtually pay their respects to the late president.

Roh served as president from 2003 to 2008. He committed suicide after jumping from a cliff in his hometown of Bongha Village on May 23, 2009, 24 days after being questioned by prosecutors about a bribery scandal implicating his relatives and 15 months after leaving the Blue House.

“Through the organized power of the people, as often stressed by the late president, a post-Roh Moo-hyun era without Roh Moo-hyun has opened,” DP leader Lee said in his address. “The people are not just there for publicity but are the main agents of history.”

But he noted, “A black shadow cast over former President Roh Moo-hyun and the Roh Moo-hyun Foundation has yet to be lifted.”

Lee said that “history has at last, at last, progressed and advanced,” but that “there is still a long way to go.”

The attendance of Joo Ho-young, floor leader of the main opposition United Future Party (UFP), drew particular attention as it marked the first time in four years that a conservative party member of his rank attended a memorial for Roh.

Joo told reporters at the ceremony, “I think many people to this day yearn for his warm humanity, easygoing character, open-minded thinking. I hope President Roh Moo-hyun’s soul may rest in peace.”

Former Prime Minister Han Myeong-sook, who was indicted in 2010 and eventually served two years in jail for bribery, also attended the ceremony. Han, the inaugural head of the Roh Moo-hyun Foundation, served as prime minister between 2006 and 2007. The ruling party has recently been calling to revisit the case amid allegations that Han had been a political target.

The 10th anniversary commemoration last year was attended by over 13,000 supporters of the late Roh and by high-profile figures including former U.S. President George W. Bush.

Over 3,300 mourners clad in masks flocked to the Roh’s grave at Bongha Village this weekend to pay respects to the late president. Tens of thousands of people usually make pilgrimages to the rural village around this time of the year.

How to become a self-illuminating president