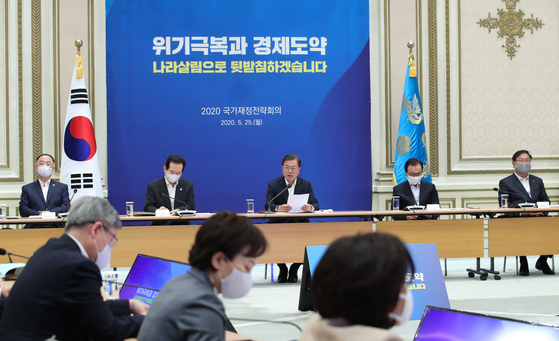 President Moon Jae-in called for a full mobilization of government spending to tackle the coronavirus crisis.


“The bottom of the world’s economic crisis is not visible, and our own economy is no exception,” Moon said during a government meeting on this year’s fiscal strategy at the Blue House. “We’re at a desperate point at which we need to ask who is spending for, and what is its aim?”

Moon is calling spending the direct means to realize national polices before the situation gets worse.

“When the people’s lives became difficult, fiscal spending played a huge role,” Moon said. “But as the contraction of the real economy including jobs and exports came on in full force, an even bolder fiscal role is needed.”

Moon said the spending should also help restructure Korea’s economy to be more digital-centric under the banner of a "Korean New Deal."

“As we convert to a digital economy, we will build the foundation for sustainable growth and future jobs through a digital New Deal and environmentally friendly jobs through the Green New Deal,” Moon said.

Emphasizing the importance of speed to the third supplementary budget, Moon asked the newly launching National Assembly to execute it next month.

On the country's fiscal soundness, Moon said a long-term perspective is needed as it is more important to overcome the current crisis and raise economic growth.

“When looking very far, this will prevent the national debt-to-GDP ratio from worsening,” Moon said. “Fiscal [spending] should act as a vaccine that will treat the economic crisis at hand and improve the immunity of the nation’s economy in the post-corona [virus] era.”

Moon asked the government to include bold cuts in unnecessary spending.

“Considering that the global situation next year won’t be easy, stringent expense restructuring is a must,” Moon said. “The government should lead in tightening its belt.”

Last week, a state-owned think tank sharply lowered its economic outlook for this year from 2.3 percent to 0.2 percent citing the coronavirus's impact on both consumption and exports in the first half.

It projected minus 0.2 percent growth in the first half of the year and said the economy will grow half a percent in the second half.

If the Korea Development Institute’s forecast proves true, it would be the slowest growth in two decades and the first time since 2009 that Korea's GDP fails to grow more than 1 percent.